I could go down the I have a genetic spelling mistake and my body is my biggest enemy, route,  but been there done that and there is something more apt, something more perfect for today.  As today is my 15th Wedding Anniversary.
Picture this I was 21 years old and we had set the date, MadDad and I.  March the 18th 1995.  The dress was bought, the hair was planned.  I had the tiara and the veil.
We had been together a year, yes not long in the scheme of things, but we knew that it was the right thing to do, in fact I had knew that MadDad was the one from the minute I met him when I was 16, but he was taken and that is a whole different post!
We had decided that we would announce our engagement and the date for our wedding a the same time and we also decided we didn’t want a big engagement, so September 1994, we told our parents we were getting married and there was 6 months to plan it.
Long enough to get everything in place, but not too long to start fretting about things and also not long enough for the costs to get all silly.
Everything was in place, just the final little bits to sort, nothing major and then I realised that I couldn’t see right, that road signs weren’t clear and that there was something wrong, so off to the opticians I went.
It was a disaster I was short sighted and I needed glasses.  The optician was baffled as I had only had my eyes tested 6 months previous and the deterioration was pretty serve.  So I needed glasses.  I went home and I sobbed my heart out.  I was so upset.  I got some glasses and I hated them.  I didn’t want to wear them to the wedding, but how would I see anyone.
So back to the opticians I went to ask about contact lenses.  Yes I could have some, but they would be pretty expensive, in fact they were going to cost in excess of £100 and it was £100 we didn’t have, especially as we had just found out MadDad had been made redundant.  So I went home sad and defeated.
The next day I received a phone call from the opticians to go back in and collect my lenses, I was baffled, he went on to explain that my mum and dad had paid for them for me and that he wanted me back in so that I could get used to them over the week before the wedding.
So on March 18 1995 I walked down the isle to here comes the bride and I could clearly see MadDad looking at me with tears in his eyes.  I could see the congregation, I could see my mum crying in the front pew and I was overjoyed.  As I walked down the isle Mrs Mad to I vow to thee my country I could see everyone looking at me.
Yes my body let me down, but my family didn’t. 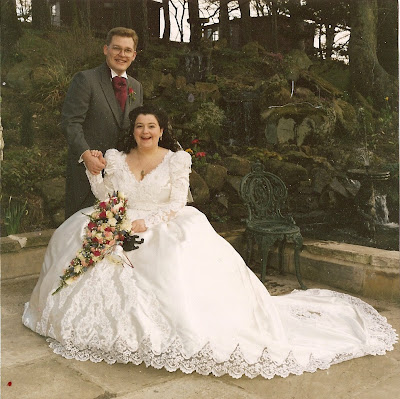 Marring MadDad was the best thing I ever did, it was the best day of my life and I love him more today than I ever though possible.  So I want to say thank you, my soul-mate for being there for me through thick and thin, sickness and health and for being the constant companion by my side.  I love you.