Maxi was asked to  write an entry in to Chris Evan’s and BBC Radio Two’s 500 words competition for children as homework and typically for my lad decided he wanted to do it last minute (I don’t encourage homework). 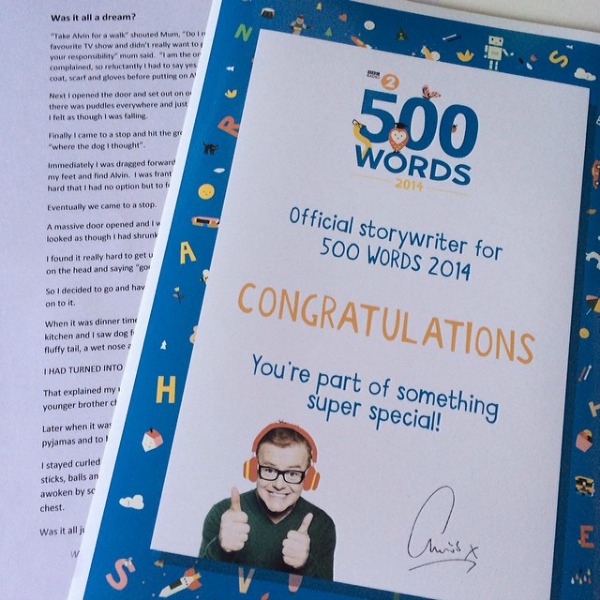 Below is his story, which we filled 30 minutes before the closing date and I printed off the certificate for him and thought nothing more of it.

Was it all a dream?

“Take Alvin for a walk” shouted Mum, “Do I really have too?” I responded as I was sat watching my favourite TV show and didn’t really want to go out in the cold, wet weather.  “He is your dog and your responsibility” mum said.  “I am the only one that takes that dog out and feeds him” Mum complained, so reluctantly I had to say yes. “OK Mum I will take him out” I replied and put on my coat, scarf and gloves before putting on Alvin’s lead and harness and the dreaded poo bags.

Next I opened the door and set out on our walk around the block.  It has been such a wet winter there was puddles everywhere and just as I went over the road I tripped in to a puddle and suddenly I felt as though I was falling.

Finally I came to a stop and hit the ground and I could see a harness and lead strapped on to me and “where the dog I thought”.

Immediately I was dragged forward by a big dark figure.  I could not resist, I tried really hard to get to my feet and find Alvin.  I was frantic as I didn’t want him to run off and get hurt.  The pulling was so hard that I had no option but to follow it.

Eventually we came to a stop.

A massive door opened and I walked in.  Everything looked like it was bigger than normal; in fact it looked as though I had shrunk!

I found it really hard to get up the stairs and no one would listen to me.  They just kept patting me on the head and saying “good boy” It was really infuriating.

So I decided to go and have a lie down on my bed, but it was huge and took all of my energy to get on to it.

When it was dinner time, I tried to get on to my seat at the table, but instead I was taken to the kitchen and I saw dog food.  It was then I realised I had four paws, white fluffy body, a big white fluffy tail, a wet nose and flappy ears.

I HAD TURNED INTO A DOG!

That explained my urge to chew on my mum’s shoes and run around the back garden with my younger brother chasing me.

Later when it was bedtime I could hear my mum shouting to mu younger brother to get in to his pyjamas and to brush his teeth.

I stayed curled up on the bottom of my bed, as it took so much energy to get here. I dreamed of sticks, balls and chicken treats and was running though the field after my brother in my dream. I was awoken by something licking my face.  It was all wet and there was a white fluffy puppy on top of my chest.

Was it all just a dream?

Well you can imagine my delight when we received the following email:

Congratulations! Was it all a dream? by Maxi is through to the next stage of 500 WORDS!

We received over 118,000 entries and this story has been picked – with just 3,500 others – to go to the Scottish Book Trust for the second round of judging.

Well done and good luck! We will be back in touch, in early May, to let you know if Was it all a dream? has been shortlisted for our Final 50.

Not only is that fantastic, but Maxi returned home from school with the news that he won his school competition with his entry. 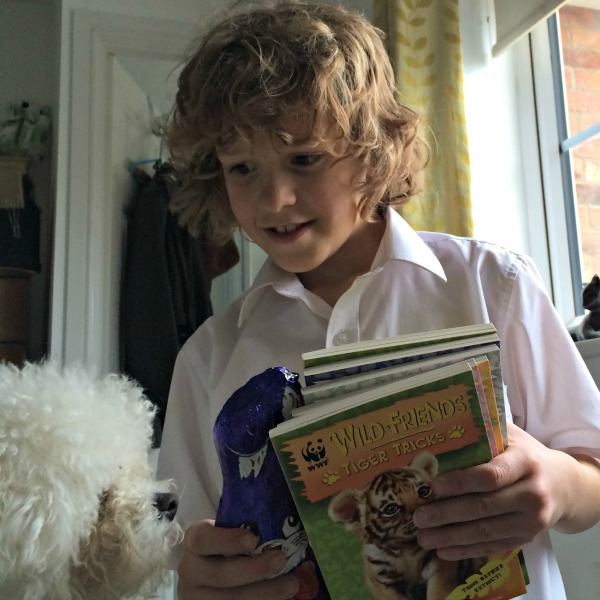 Here he is showing me and Alvin (his inspiration) his prizes.  Yes I was a proud Mum.