The minimads took their first trip to Alton towers this Saturday.  My boys are mini thrill seekers and adore rides of any sort and were a little disappointed  that most of the big name rides were for children over 1.4 meters.  Of the ten thrill rides the boys were not big enough for eight of them, however they still managed to go on at least 15 rides and had a great day.  If you have younger children you need to bear in mind that creepiest land doesn’t open till May. 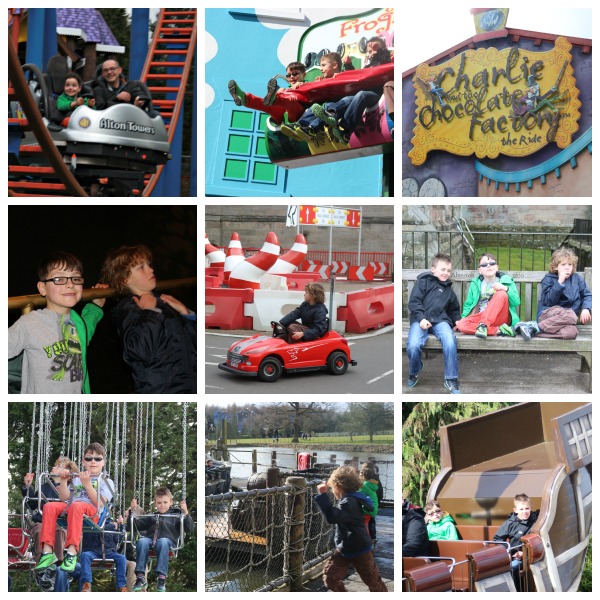 Parking is £6 and is quite a hike from the park entrance.

Food was nice and wide ranging with something for everyone including hot dogs, burgers, kebabs, wraps, noodles, chicken, BBQ and lots for vegetarians.  Prices weren’t over the top with a burger meal costing under £7.  The donuts were especially nice.

Skyride is a cable car with two stops and it goes much quicker Than you think it is from watching and the boys enjoyed the views of the gardens from above.

The queues were not to bad, but the queue time were underestimated.  On thirteen the estimated time for 70 minutes but it actually took over 2 hours.  Mini said it wasn’t worth waiting all that time for, but half the time would have been ok.

We loved Sonic Spinball best, it is a twisting roller coaster with cars if four people 2 facing each way and as it goes round the corners it spins.

The haunted house was scary according because on the TV there was zombies.

Shark bite Reef by sealife is an on site aquarium which is a mini sealift centre which has a range from sharks, rays and shrimps.  Everyone really enjoyed it and it was a great break from the cold weather and from the rides.

We had prepaid tickets so avoided the queue at the ticket kiosks, but the prepaid ticket entrance didn’t have any park maps available.

To see what Frugal Family thought of Alton towers take a look at their review.

The Sun + are offering you the chance to get your hands on two tickets for Alton Towers by signing up to The Sun + for a £1 month’s trial of their subscription and then a subsequent month at under £8.67 so a saving of £80.

To support the #Sunfession campaign, I also have £250 to give away to you lovely blog readers to spend at Alton Towers. All you need to do is log in to Twitter or Instagram account and retell a hilarious awful thing you have done to your kids.  Don’t forget to include #Sunfession  and #mumthemadhouse. Hit tweet or post, and then visit the Sun site to see your #Sunfession appear.

My #Sunfession is that the boys think the ice cream van only plays a tune when it has run out of ice cream, just like my dad told me

DO NOT JUST TWEET THE RAFFLECOPTER ENTRY, WE NEED YOUR SUNFESSION
a Rafflecopter giveaway