I bake a lot and I cook a lot, in fact I pretty much cook from scratch each day and if you want to see more of my cooking then take a look at Frugalicious Food, where I blog about all things food related.

Sometimes I get stuck in a baking rut and just keep on making the tried and tested things like my banana muffins, knowing that they will go down a treat with the boys and MadDad, but then sometimes I get adventurous. 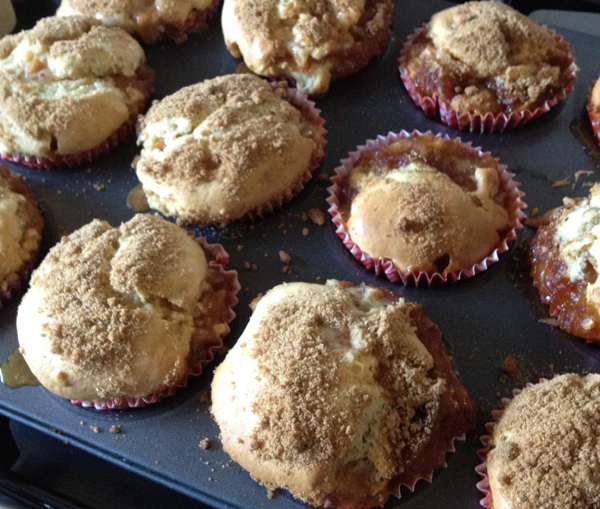 Method
Chop the apples and add them to a pan with all the other sauce ingredients and cook until sauce like and allow to cool.

Sift the flour, sugar and baking powder into a large mixing bowl In a SEPERATE bowl beat the butter and eggs together then add the milk.

Stir the flour mixture into the egg mixture until just incorporated and smooth. Put on a high speed and beat for 2-3 minutes until light.

Finally add the fudge pieces and mix Spoon half the mixture into the muffin cases then spoon over the applesauce. (Ensure that the sauce is the same consistency as the atter so that it doesn’t sink into the cakes)

Cover with the remaining muffin batter and sprinkle with lots of cinnamon sugar Bake in the preheated oven for 20-25 minutes.

Cool on a wire rack.

Hints and tips from the first time maker.

I put far too much sauce in and it bubbled out making the muffins rather sticky to eat, but they are delicious.  Next time I will put less batter in the bottom and then less sauce and more batter on top.

Maybe I should have waited until I had watched Eric make them on his Channel 4 series “Baking Mad with Eric Lanlard”.  The series is broadcast each weekday on Channel 4 around lunchtime, but you can catch up on 4OD.  Each episode features two of Eric’s easy to follow recipes and a bake off between three members of the public who are enthusiastic baker and want to show off their baking skills to Eric and the nation.  The winner of the bake off then gets to create a delicious dish with Eric in a Masterclass session.
Jam Doughnut Muffins 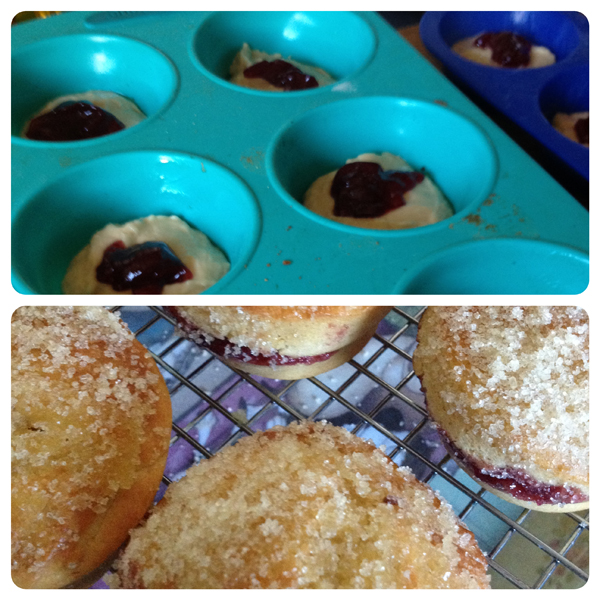 These are delicious, but again I put too much jam in!  There is a great tutorial on making these at Tales from a happy home.