Next week is child safety week.  What is that you ask, well it is an annual campaign run by The Child Accident Prevention Trust who are the UK leading charity in this field.  This year is focussing battling morning mayhem. 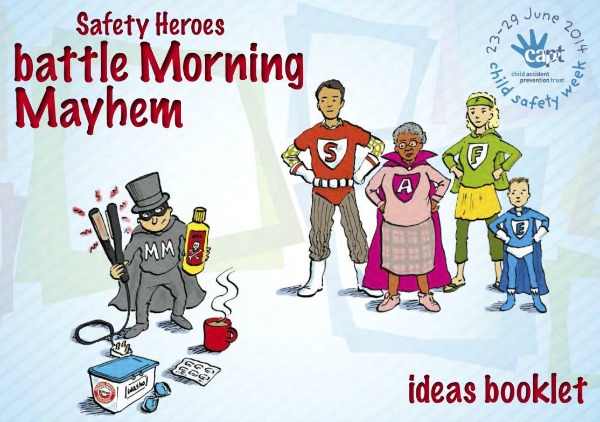 I am working with Betta Living to help publicise this as it is a subject close to my heart, especially after an incident we had last week.  Let me tell you about it.

Mornings in The Mad House

I am not a morning person, seriously I walk round in a haze until I have had two cups of tea and a shower. Mini takes after me and we are often prodding him 5 minutes before we have to leave the house as he will get dressed and go back to bed!  Maxi, however, is an early riser, often up before even MadDad gets up at 6am for work.

The boys are becoming pretty self sufficient when it comes to mornings now, they mostly get their breakfasts and have even started to use the toaster.  Well I am growing men!

Last week, we had some waffles left over from the weekend and Mini popped them in the toaster whilst I was upstairs in the shower.  The first I knew that anything was wrong was the smoke alarm going off and Mini running to tell me that there had been a fire in the toaster, but Maxi had dealt with it.

The waffles had not gone in the toaster straight and had been unable to pop up automatically as they got stuck and being full of sugar they set fire.

Thankfully we have a fire blanket in the kitchen and Maxi had use that and turned off the toaster.  I rushed out of the shower to find that he had even opened all the windows and the back door.

Amazingly Maxi had covered how to deal with kitchen hazards at Cubs a couple of weeks previous, but it could have been much worse.

What Can you Do?

Take a look at your morning routine and figure out the hazards that you can reduce. The Child Safety Week website has some great resources.