We are deep in the middle of the fidget spinner craze here and both of my boys have a number of different fidget spinners.  However, this post has been totally inspired by Sarah from Frugal Fun for Boys and Girls DIY LEGO Fidget Spinner.  The boys came home from school and spend 20 minutes on the Ipad whilst I prepared some snacks and then the next three hours engineering their own DIY LEGO Fidget Spinners.

We didn’t have the exact parts to make the spinner from Frugal Fun for Boys and Girls, but in some ways that was a brilliant thing, as it meant my boys had to use their imagination and engineer their fidget spinners from parts that we did have.  Now we have an extensive LEGO collection, some of it is over 35 years old and from when I was growing up!

So they got out all the LEGO and found parts that they thought would work.  They experimented and they decided on which pieces of LEGO to use. It was really fun to watch the work as they are so different.  Mini was very much try everything and something will work, whereas Maxi had a clear idea of what pieces he needed.  In the end, they came up with three DIY LEGO Spinners to share with you.

If you have younger children then why not follow our instructions to make a LEGO Spinner with then, but for old children, I would suggest just giving them a tray of different LEGO pieces and letting them engineer their own.  It is a great way to talk more about the science of spinners and why most of the bought ones have bearings.

How to make DIY LEGO Spinners

I am going to share with you some of the different ones the boys made.  As you will see the common materials between them all are an axel and a circle piece with a central hole.

The idea is that the circle piece with form the central part of the fidget spinner that rotates around the axle.  Some axels have a stop cap end, some don’t.  The one above has a stop on one end, so the boys added a four stud brick upside down as the stopper for this spinner.

They then mounted four eight-stud bricks to be the wings.

For this spinner, the boys used an axel piece with no end stud and found two different sized small LEGO pieces that fitted securely on the acel for each end of the spinner.

So one end cap goes on and then the circle piece before the other end cap is added.

Then the wings are added.  The reason that the boys used eight stud wings is so the spinner hit in their hand without catching the area between the forefinger and thumb.

You do need to bear in mind that the wings will come lose is spun too hard, so if you are planning on using them long term I would suggest supergluing them on.

By this point, Maxi was getting all adventurous and the ultimate spinner was created!

Maxi tried various options before settling on 2 by 2 plates a stopper attached to the larger plate, then a brush ann the other large plate.

Before adding the wings and then another bush as a cap for the axel.

The Physical Science of Fidget Spinners

Talk about why they think that their LEGO Spinner doesn’t spin for as long as a bought one with bearings.  To demonstrate try this experiment: Slide a book across the floor. Then do the same with a marble. Ask them which they think will go further.  The marbles will due to the friction associated with rolling motion is less than sliding friction. LEGO Spinners are utilising sliding friction rather than rolling.

Discuss how gravity affects the spinner.  Does it spin faster flat or on its side?

We are fans of fidget spinners and think that they are a great playground craze, however, not a classroom necessity and my boys do not take theirs into their class.  I am a big fan of these inexpensive and screen free toys to me they are a modern version of the old spinning top.  My boys have even started to watch videos on YouTube of how to do tricks with their spinners. 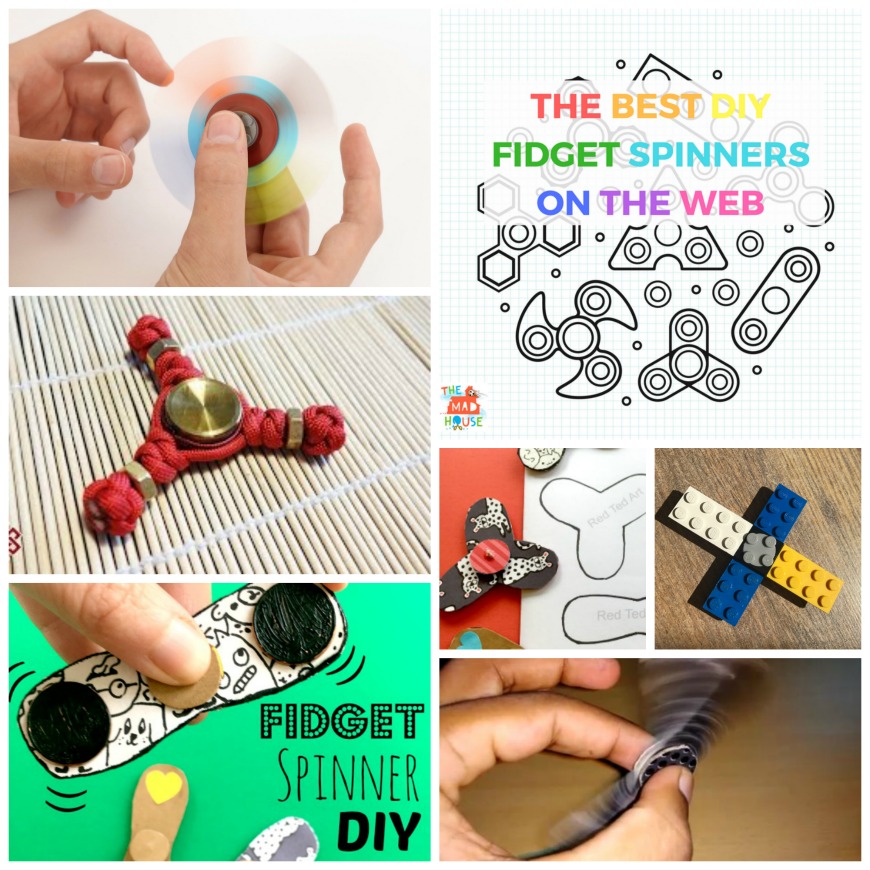