Pajama bear had to go in for surgery over the weekend, you see he had developed a couple of holes and he needed to be fixed. 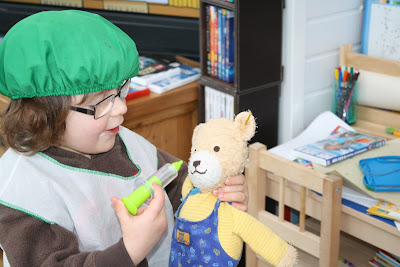 So cue the medical kit – stat, outfit – stat, stethoscope -stat, tape – stat, well you get the picture.
Mini was a very good doctor, who decided all would be well one he “snipped off bears boobies”!  He made sure that he was kind and considerate to his patient. 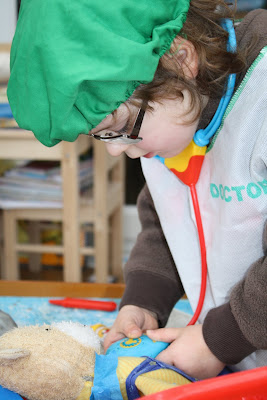 He tried to tape him up and bandage him, but to no avail, emergency surgery was required and mummy Consultant had to administer sutures, whilst nurse mini and maxi assisted.
The patient has had plenty of rest and fluids and is feeling a lot better now and so is Mini. 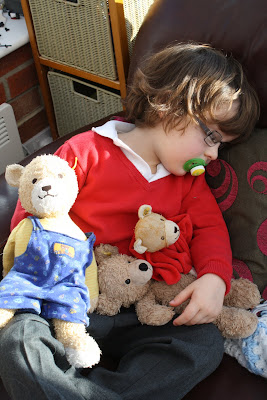 But Golly being a Junior Doctor is exhausting work!
As you can possibly tell mini has a bear obsession.  He needs his bears and they all have names, we have Pajama bear, Bear Bear and Red Bear in the above picture, but in his bed are Spare Bear (same as Bear Bear), Red Bear Two, moon bear, tatty princess, blue bear and music bear).