Romance, what is romance? I have to say I often feel the same, especially with two rather full on boys, however, since the transformation of Mini’s bedtime, we have been having much more relaxed evenings and also making sure that we actually dedicate some time to ourselves and to each other.

BC (Before Children) we used to really enjoy going to the cinema, but since we do not have any one to baby sit we haven’t been for loooooooooooooong time.  However, Warner Bros sent us a care package after the Oscars, which included: 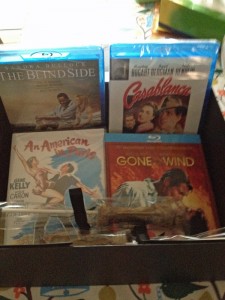 Over the last month we have made time to watch these films, not ones that we would have normally chosen ourselves, but ones that we have enjoyed, not only for the films, but for the company.  We have made a real effort and off have gone the mobile phones and other electronic devises.

I have been amazed at how powerful, current and moving the older films are and even more amazed at the fact that I hadn’t seen them before!  Also they were easy watching, so we could chat during them and not lose the plot, which is an issue I have with a lot of films and programs these days!

But more than that, it reminded me why I married MadDad and just how much I enjoy his company and how much I relish time on my own with him.  We have resolved to make more time for each other on an evening and also to try and arrange a couple of days or nights out just for us.  For the last seven years our life has revolved around the boys and the time has come to reclaim a bit of  couple time.  We are not talking about a regular date night, just taking the time to chat and turn off all outside interruptions.

We have and are quite a tactile couple and hold and all that in front of the boys, but I have to admit to finding it hard to find enough hours in the day to get everything done.  Something has had to give and it really has been our time together.  I was finding once the boys were in bed and I had everything prepped for the following day all I wanted to so was veg on the sofa and go to bed.  Finally now that Mini is going to bed like a good boy and Maxi is getting up and making his own breakfast I feel a little more human!

How do you make time for yourself and your partner?

One thought on “Family Film Night – A romantic interlude”