This fab fun phonics game with Tsum Tsums idea is brought to you by Sara-Jayne from Keep Up with the Jones family.  Sara-Jayne is a fellow mum to boys, she has three under six and is a Junior School Teacher.  This post is part of our learning with manipulatives series. 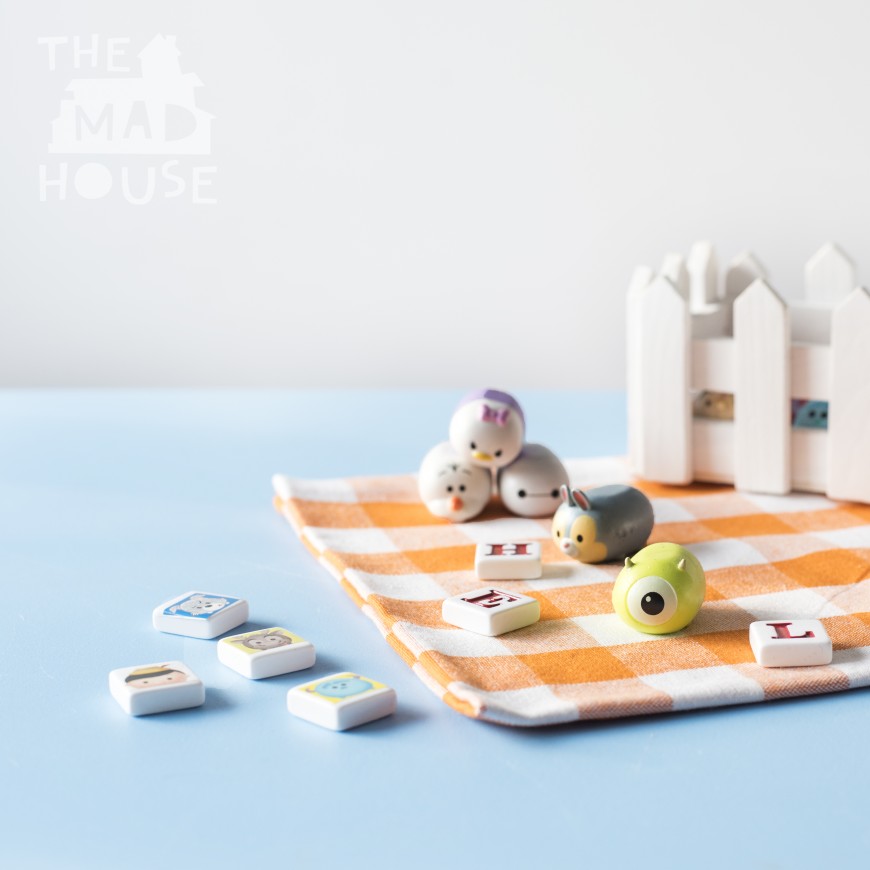 Today we’re working with my boys’ favourite type of manipulatives – small toys. Our house is practically taken over by tiny little monsters, zombies, pets, glittery creatures – and now these little people, the Disney Tsum Tsums. I’ve no idea how my now four year old found out about them but suddenly they became the must-have toy of his little life and he drew little pictures of them on his wishlist for Christmas AND his birthday. They’re tactile, rubbery little creatures which thankfully have no horrible smell to them – and as they’re Disney I’m generally happy enough to indulge him with them as rewards for jobs well done. 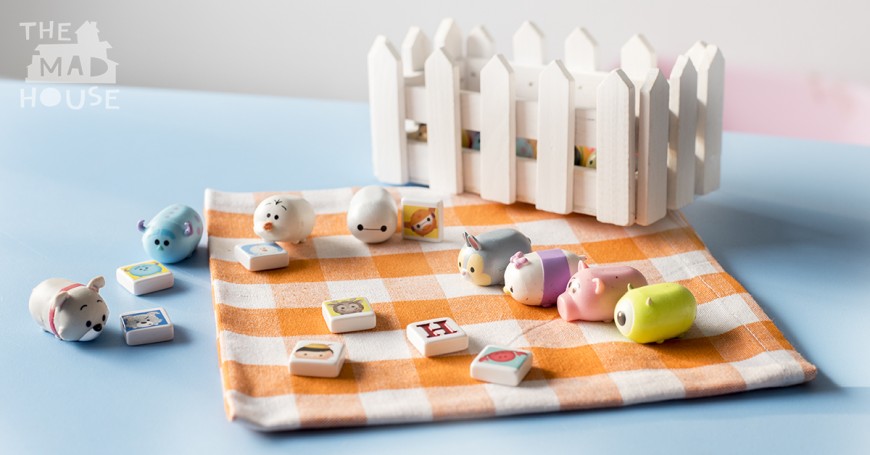 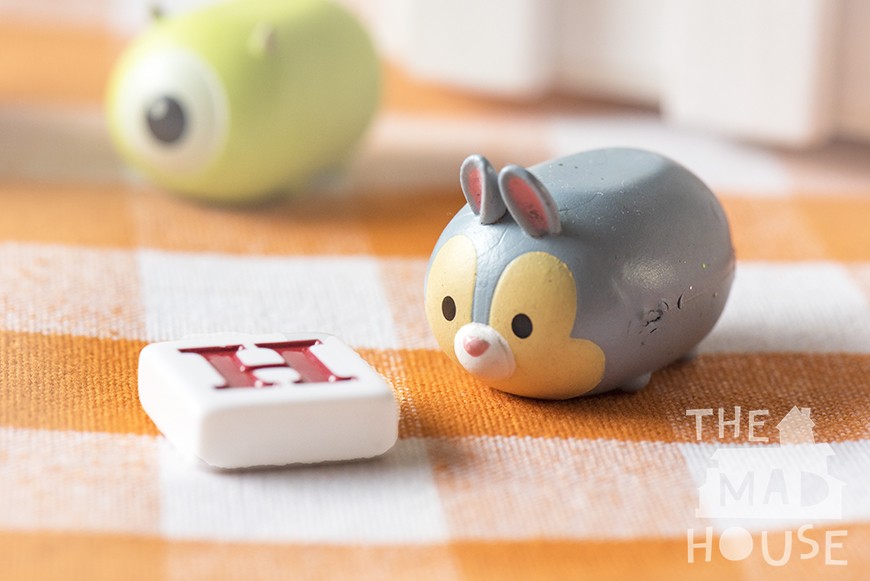 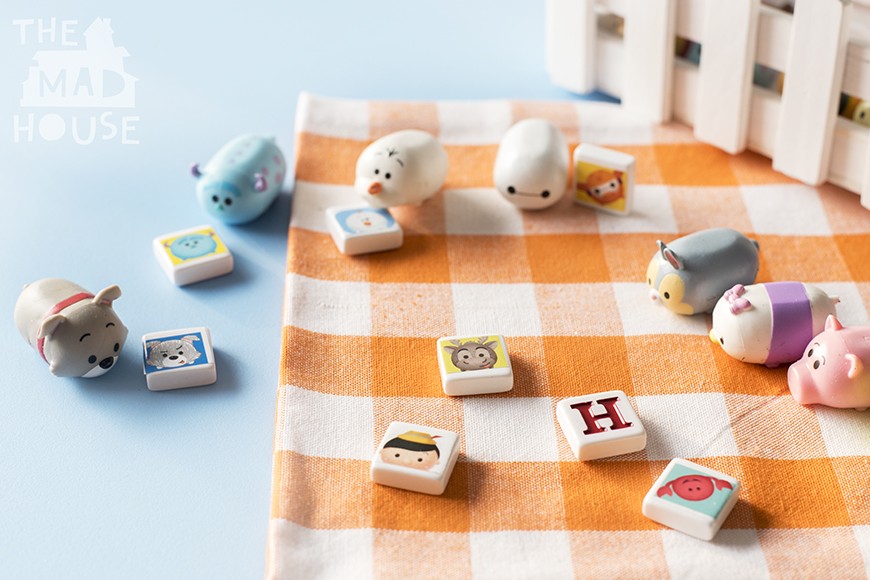 We used little white picketed fence containers that we use for growing magic beans [jellybeans] in, because they were like little corrals for the Tsums and my boys enjoyed welcoming new members that they had won into their ‘fold’. They also looked quite sweet, peeping through the little fence posts. 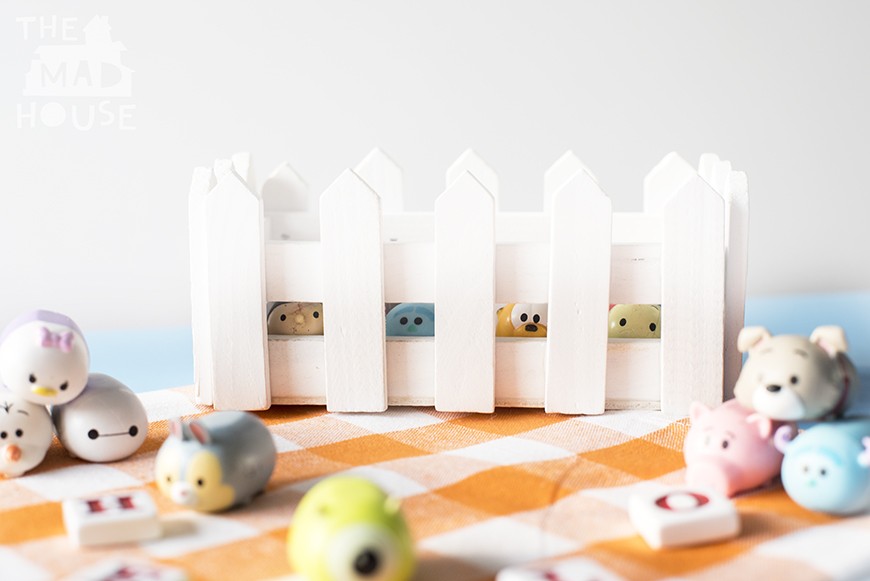 Ways to play this phonics game 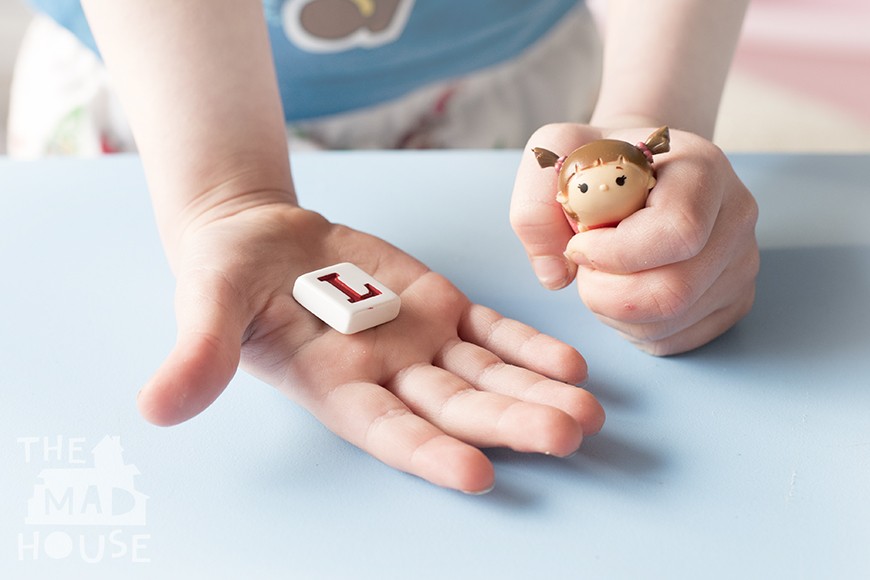 If your children are competitive like mine, or you’re playing too and you want to offer them the chance to win your Tsum Tsums, then a final, timed round can be played – and a sand timer will be needed. This is best suited to children who are over the age of 6, who aren’t emotionally attached to the little toys and who understand that this is just a game and that no toys are being stolen from each other. 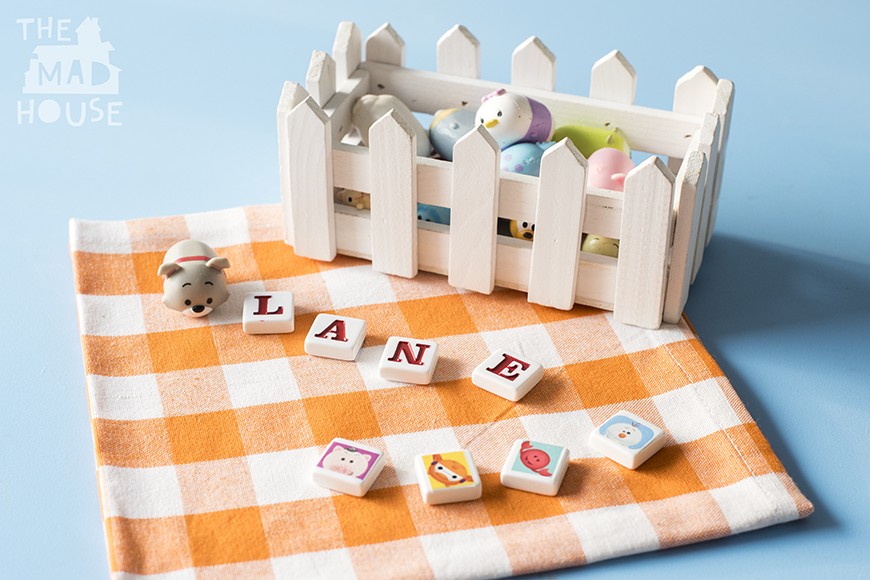 Each player has one minute to try and poach the other player’s Tsums by extracting tiles from the bag and describing one of their opponent’s characters. A new tile can only be taken from the bag after the toy before it has been placed in their fold. After one minute, the next player takes their turn and after all players have completed their minute, the Tsums are counted to determine who was the winner. 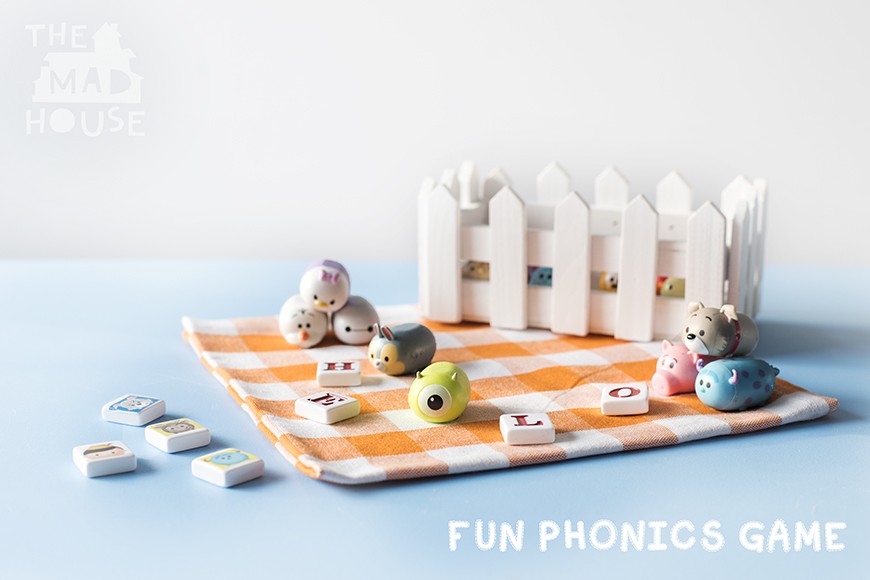 Alternative ways of winning for older children can be determined by listing the words they use and awarding points for length of word and complexity.

Have fun with your Tsum Tsums – and in case you’re wondering, they are pronounced Tsu-mmm Tsu-mmm, kind of like zoom zoom, but with the initial sound as it is in tsunami! 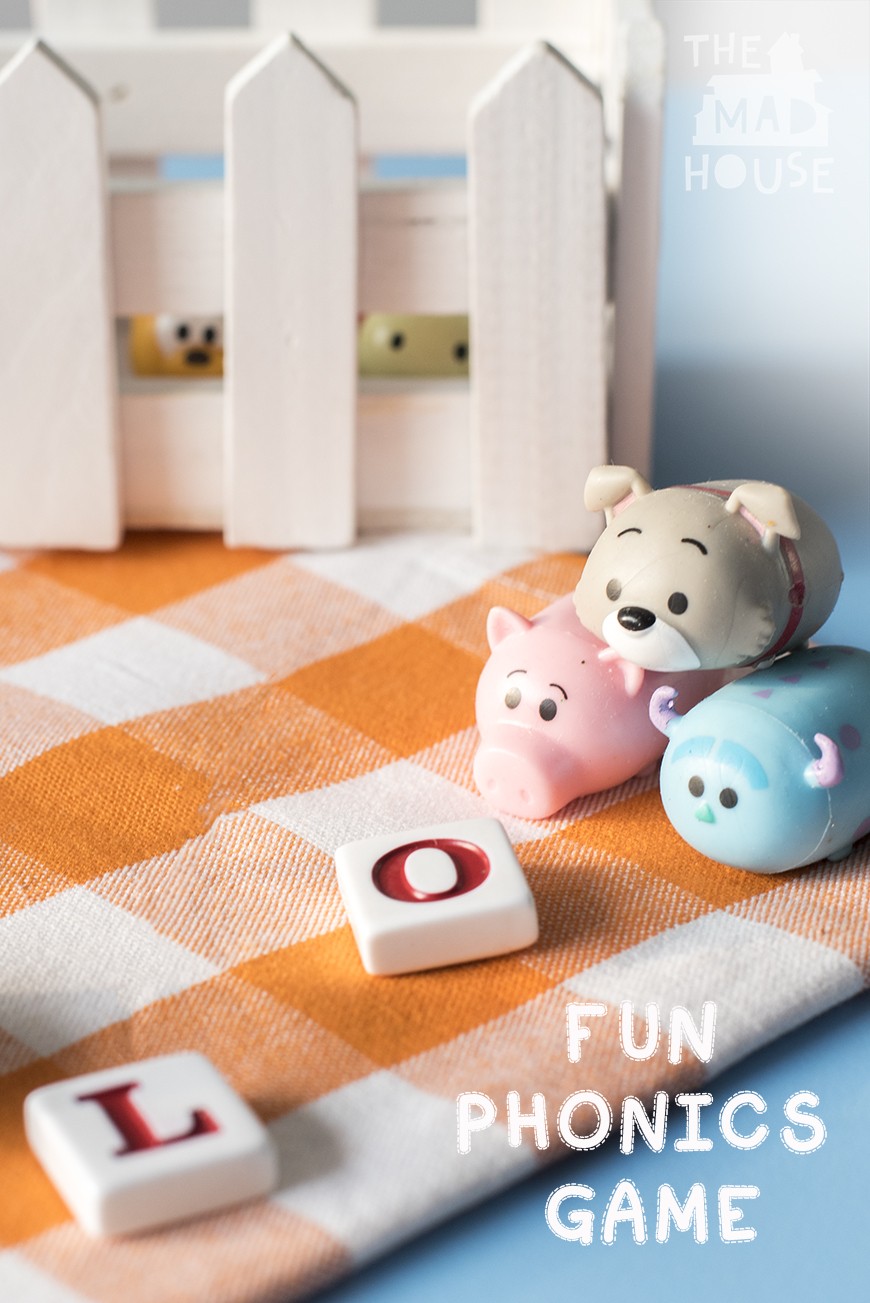 Other fab ideas for using small toys in learning:

Directionality Activity with Small Cars from Teach Me Mommy

Learning Shapes with Toy Cars from Adventures of Adam

Fun DIY Phonics Game from Mum in the Madhouse

What Do Animals Eat? Classification Activity from Schooling a Monkey

Color Mixing with Toy Cars from The Kindergarten Connection

AM and PM Time Telling with Shopkins from Sugar Aunts

Fairies & STEM Activities: Gardening with Kids from Edventures with Kids 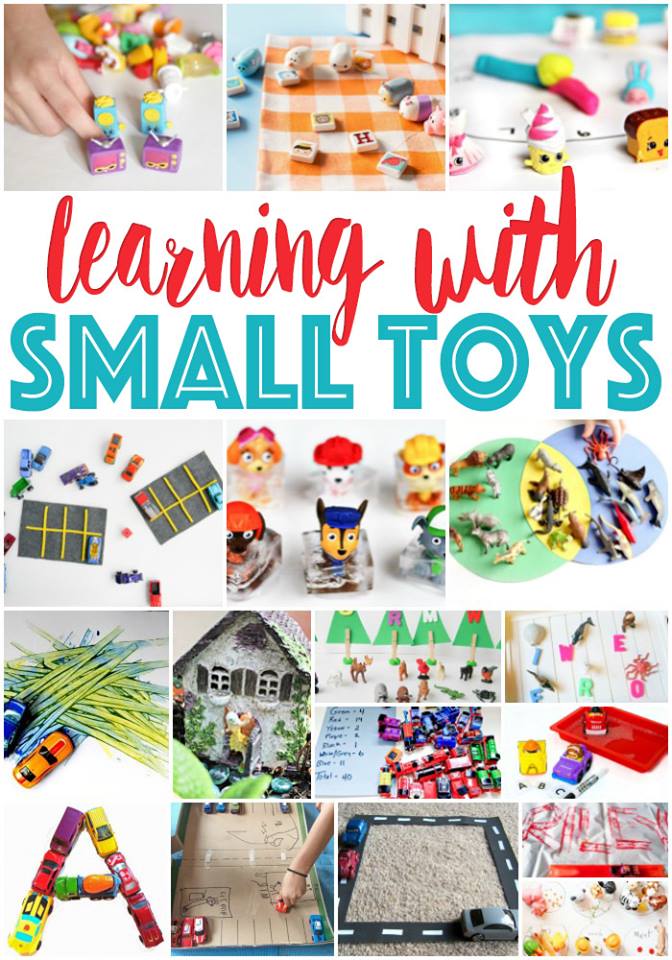