So the story continues….
We were allowed to bring Maxi home 3 days after I had given birth, my mum had gone back to North Yorkshire, so that we could spent some time on our own, just the three of us and the two cats.
So we popped Maxi in to his car seat and left, just like that.  No one came and checked if we were going to be suitable parents, if we knew how to look after him or any such thing.
The first thing we did was make a trip to Waitrose.  I was so sure I would breast feed that we didn’t have any supplies, so we needed bottles, formula and a steriliser.  I was unable to breast feed due to the medication I had to take.  It was just so odd walking round the supermarket with the smallest baby, we were stopped all the time being asked about him. 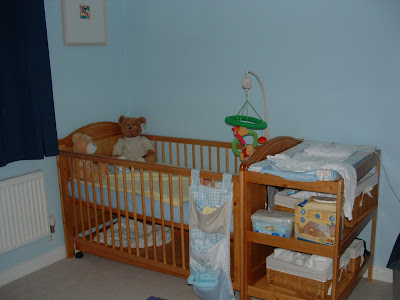 We arrived home to a house filled with cards and flowers and also a nursery.  MadDad had managed to paint the nursery and put together all the furniture whilst I was in hospital.  We hadn’t done anything as we were so sure that this pregnancy would end in tears like all the others.  We popped Maxi in to his pram by the window (as he had slight jaundice) and proceeded to spend the whole day just gazing at him with complete wonder. 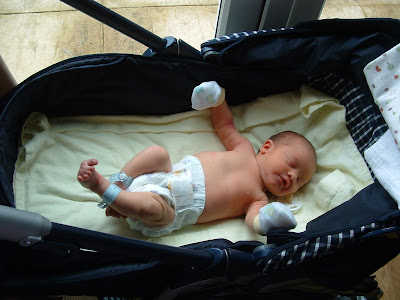 MadDad had taken a couple of weeks as holiday and we kind of just pottered around, as I was recovering from my section and spent most of the time wondering how we managed to make something so beautiful. 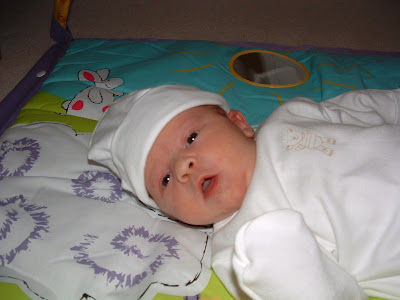 7 days after Maxi was born I was feeding him and MadDad was getting his bottles ready when I sneezed and felt a little damp (TMI Alert – I thought I had wee’d myself), so I asked MadDad to come and finish feeding whilst I got changed.

If only it had been a wee!  I had split my scar and had to be restitched after a 999 dash to the hospital.  Gosh this parenting lark was eventful.

I took things a lot easier after that, I guess that I was so ill during the pregnancy and I had stopped feeling sick and ill once I gave birth that I had been overdoing things.  We still look at Maxi and think “I made that” and stand in utter amazement at the complexities of a human and think “how it is all possible”?

I look at Maxi complete awe, he is no longer a baby, he turns 5 tomorrow and love him more now than the day he was born, I have been blessed with such a wonderful child and many people wonder how we would have go on to have Mini after such an experience with Maxi.  Well he turns four in June and in the lead up to his birthday, I will be posting a “Getting Mini” series, so you will have to wait for those answers.

But I would do it all again in a heartbeat, even now if it was physically possible.