I hope you are sitting comfortably, I just want to preface this with a little word about the fact that yes, getting Maxi was a long hard journey, but it was pretty joyous too.  We got a wonderful son at the end of this all and it was so worth it in every sense and way.  So although it may all seem traumatic wrote down like this, it was a blessed time for us all.  I also wanted to say that all children are precious and Maxi is no more or less precious for the heartache it took to get him and also he has no idea what we went though and nor will he.

Right where were we?

I had been given the OK to be induced at 38 weeks after 10 days in hospital.  So Sunday I was given a suppository, which didn’t do anything and I was then given a further 2 suppositories which failed to get me to progress beyond 3cm.  Monday came and went, as did most of Tuesday.

At this point the Consultant and the Midwife decided that they would break my waters and pop a monitor on Maxi’s scalp.
Up until this point I was coping with the TENS machine and pethidine, although I hated the feeling it gave me, in fact I think that is why Monday and Tuesday passed me by.  I couldn’t have gas and air as it was making me sicker.
So I asked, well I begged for an epidural and thankfully in less than 10 minutes I was given an epidural and it was fantastic, I went for a pain score of 8 to one of 3, which would have been zero apart from there was a spot on my right side that just refused to numb.  It was very early Wednesday morning by this point and my mum had gone back to our house.  MadDad had been with be for over 80 hours solid.
I seemed to be progressing quite well with the epidural and the drip getting to 8cms, when all of a sudden everything changed.  I had a bleed and I also had decelerations in Maxi’s heartbeat which didn’t recover.  This was 11.50am and by 12noon Maxi had been born by Crash section.

This was a very surreal experience and everything seemed to happen in super fast speed with MadDad running behind me putting on scrubs.  All the theatres were full so I used an emergency one which is actually at the end of a corridor on the delivery suite.

I was given more local anesthetic and warned that I would possibly feel some thing sue to the area which refused to numb.  We were also told that they didn’t want to put me under a general anesthetic due to the vomiting and if I did have to have it that I would wake up with a tube down my throat. 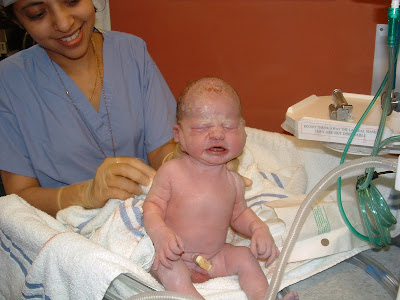 It all happened oh so fast and within 5 minutes Maxi was born with an apgar of 10 and weighing 7lb 2 oz.  I have never cried so much in my life, tears that he was fine, then things get a little hazy.

MadDad filled me in on the details after, as I was still losing blood, he said it looked as though I was in a slaughter house behind the curtain, blood everywhere, so much so that they dropped my placenta!

They sorted me out, stitched me up, offered me a blood transfusion, which I declined and then took me to a private room and that is the last thing I remember for a full 24 hours!

My body was battered and bruised and my blood levels were all over the place.  The consultant had come in and they had started me on some medication to stabilise me and MadDad took over looking after Maxi, I woke up to see him sat on the seat next to me giving him a bottle and telling him how wonderful he was, it was a scene that melted my heart. 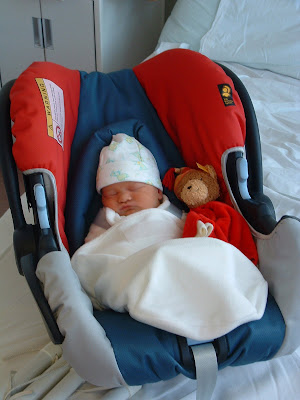