Skip to content
Home » Birthstory » Getting Mini – Part One

My darling boy will be four on 24 June, I truly can not believe how time flies, so now is the time to tell you all about getting mini.  I have told you about getting maxi here 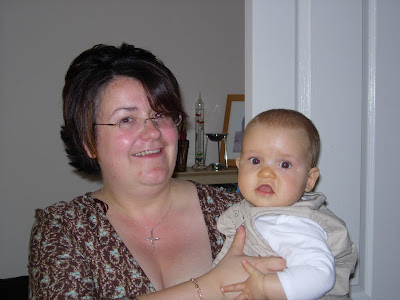 Maxi and I on the day I found out I was expecting Mini
After the pregnancy I had with Maxi, I wasn’t sure about having another baby, but watching him grow we knew that we didn’t want him to be an only child.  So we made the decision not to take any precautions, well other than the fact I had just had a baby!
Maxi didn’t sleep, well never more than about 4 hours at a time, but that was what I expected.  So when I started to feel sick and dizzy I put it down to the fact that I was tired, exhausted even.  Compounded with the fact that he had just been released from hospital and we were back from the North East from his joint christening with my niece.

The last thing I expected to be was pregnant again.  We had a test in the drawer from Maxi, so I took the test and me and MadDad were nearly floored, but you couldn’t wipe the smile off our faces.  Maxi was to be a big brother.

I spent the next couple of days still feeling terrible, I was dizzy and nauseous and then the vomiting set in with a vengeance.  I suffered Hyperemesis with Maxi, so knew that this was it all over again.  I was petrified.  How was I going to manage looking after my baby if I was going to be that ill all over again.
So MadDad and I went to see my wonderful GP and she agreed that I should start on the anti nausea medication immediately, this meant that MadDad had to inject me 3 times a day in my bum.  It was worth it, it reduced the sickness from pretty non stop to about 5 times a day.
We also made the decision that we would relocate back to the NorthEast, as I wanted to be a stay a home mummy.

I was due to return to work at the end of March from my maternity leave and we agreed that I would take any holiday due to me and then roll straight on to my new maternity leave.  I don’t think I was particularly popular!

I also made one of the biggest decisions of my life, I would learn to drive.  I did try when I was 17, but after 3 fails gave up and had never felt the need to drive since.  So I found a sympathetic driving instructor and explained to him my situation – pregnant, sickness and nausea and really wanting to pass my test and I started to have lessons.  Paul my instructor was great and I passed my driving test in the March, 3 months before Mini was born and the inspector didn’t even know I was pregnant!
We sold our house and found a house to rent in MadDad’s home village.  I cant say that moving 360 odd miles, with a one year old and and being pregnant was fun, but we managed.  We moved in the April 2006.  Maxi had just turned 1.  I was getting more and more tired every day and we spend a lot of time snuggled up on the sofa and playing cars in the front room.
Yes I was still being sick, coupled with the fact that I had low blood pressure which meant that I would often faint when changing a nappy.  I used to sit and cry at the fact that Maxi would know to bring me the tissues when I went running to the toilet, but we managed with a lot of help from my mother in law.
After my experience with my previous section I as determined not to have one this time.  I couldn’t contemplate the thought of a 15 month old,  a new born and a section.  So I went through copious meetings with my new consultant (I was going to give birth up North, rather than at the Royal Berkshire, where Maxi had been born) and we agreed that we would aim for a VBAC, but there could be no induction and they would monitor me closely after the abruption I had with Maxi.  I would like to say it all got to that stage, but me being me, it didn’t!
to be continued…..