You can find part one here…….. so now on to the next part of the saga.  Now just like I did with Maxi’s birth story I want to preface this too.
Yes getting and giving birth to both my children was traumatic and more so that these stories can ever tell.  But you need to know that I would do it all again in a heartbeat.  They are so worth it.  They are wonderful boys, no more precious than any children and just because their births etc were difficult doesn’t mean that they are more precious than any other child.  Every child is precious, every child is a wonder in their own right, but to me, mine are just indescribably incredible.  I have said before that neither of the boys is aware of how hard their births were and they will not know if I have my way, not until they ask.
One of the reasons for writing this is each year it seems less real, more of a fairy tale, somehow I am afraid I will lose it all together if I don’t write it down somewhere.
May 2006 was warm and June was proving to be warmer still,  Maxi and I took each day as it come, resting, relaxing and playing.  MadDad often arrived home to find us both asleep cuddled up on the sofa and ended his days cooking and looking after the two of us.
My vomiting had stepped up a pace and I was finding it very hard to keep hydrated and I had keytones in my urine and I knew it was getting worse, as my breath smelled of nail varnish remover (strange, but true) and also the movement of mini had reduced (I as 36 weeks) pregnant, so I agree with the midwife over the telephone that I would make my way to the day unit to be monitored for a few hours.  I wasn’t worried, I Dropped Maxi at my Mother in laws, I didn’t take a bag and was singing along to Snow Patrol in the car on the way.
When I got to the unit, they found Mini’s heartbeat straight away, which was very comforting, but they struggled to take blood (15 attempts) and I had protein and major keytones in my urine.  They suggested I gave MadDad a call and suggested that I went on to a drip immediately to help rehydrate me, which mean more attempts at trying to find a vein.
Anyway, when my bloods came back they made the decision that I needed to be admitted and also see the consultant immediately, as the results were not great at all.  The vomiting had gone from 5 times a day, to constant and I was also bringing up fresh blood.  So MadDad packed me a bag and came in.
The Consultant made it clear that we needed to get mini out, but he wanted to try and wait until 37 weeks and we decided that I would have steroids to help mature his lungs and I was to remain in the hospital where they would try and control my nausea.  The following week is not one I wish to go in to in detail, suffice to say, the nausea didn’t stop, I was very ill, I discharged myself against doctors orders and physiatrists got involved and the final outcome was that I agreed to a scheduled c-section for the 24 June at 1pm.  So lets fast forward to that time.
I have to say that the scheduled section was a much better experience than the crash section I experienced with Maxi.  It was more relaxed and I didn’t panic about vomiting, as I knew they would be there suctioning it for me.  It was as pleasant as it could be and by darling mini was born at 37 weeks gestation weighing a very respectable 6lb 12oz with a head of dark hair.  They didn’t drop my placenta like they did with Maxi, but it did go off to pathology for tests (as I had previously had a hydatidiform mole pregnancy). 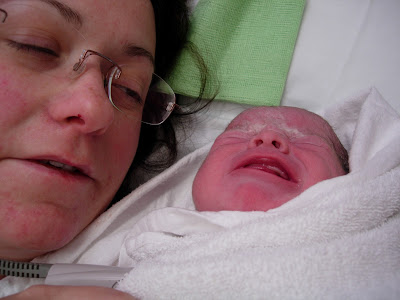 I was still vomiting, with Maxi it stopped the minute he was born, but I still felt terrible.  I was left in recovery with mini laid flat despite asking to be sat up and without a drink for in excess of four hours and then only moved after MadDad put his foot down.  They were reticent about removing the catheter or even getting me standing, which was very odd, as with Maxi I was encouraged to be as mobile as I could be as soon as I could be.
I couldn’t wait to get out of the hospital, as I was in a private room all on my own with a newborn and I was vomiting every hour, so we agreed that I could go home the following day. 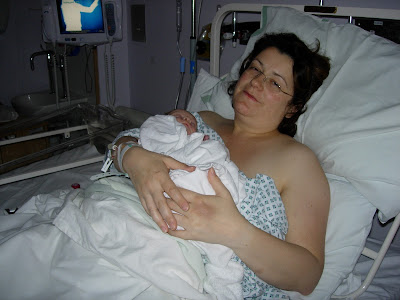 MadDad was wonderful,  Maxi was missing me and overnight went from my little baby to a toddler.  He adored his new brother and him and MadDad looked after mini for a week, whilst I was bedridden and visited by our GP 3 times a day.  It wasn’t the best recover as I wasn’t allowed any other pain relief apart from paracetamol suppositories due to the blood results and nausea  (I couldn’t keep anything down), but slowly things got easier.  Mini sleep in a cot next to the bed, initially next to MadDad.
My three boys bonded, they spent a wonderful hot week watching the world cup and learning each other’s likes and dislikes whilst I recovered best I could upstairs.