Take a look at these photo’s.  They make me smile.  Ever since Maxi was small he hated dressing up.  It has never been his thing.  He doesn’t do it at school and even though we have a huge dressing up box at home he has never dressed up. 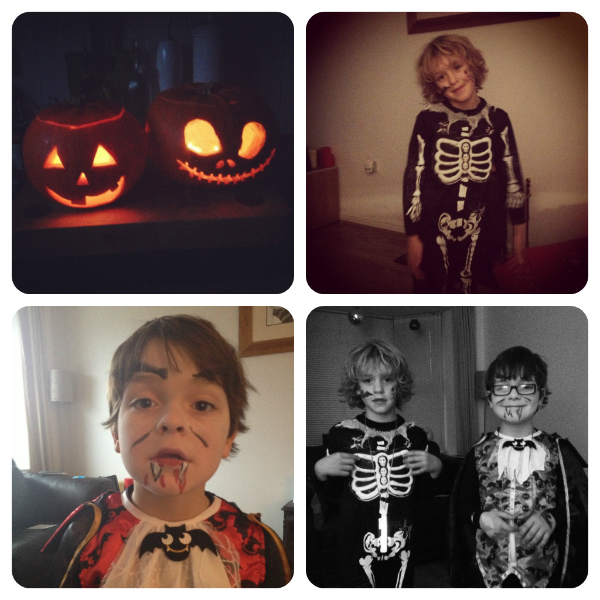 Today we were sent some Snazaroo face paints by the wonderful chaps and chapesses at Panasonic and Mini decided he wanted to have his face painted as Dracula.  So me and Maxi sat him down and I did the best of a bad job.  When I was finished Maxi asked if he could put a pumpkin on my face using a stencil we had been sent, so I said of course and then he asked for a couple of stencils on his face.  I bit down hard on my lip and tried not to squeal a th shock and stenciled on a bat and a spider web as requested.

I then went in the kitchen to tidy up the mess and light the pumpkins and left the boys to play a board game.  You can then imagine my shock when I walked in to find Maxi had been in the dressing up box and put on Mini’s skeleton costume from last year.  Yes it was short, but he had put on his black thermal pants under, so you couldn’t tell.

I decided not to say anything and you should have seen MadDads face when he got home.  He was delighted and for the first time ever he took both boys trick or treating.  So good things come to those who wait, either that or the lure of all that Halloween candy got too much for him!

5 thoughts on “Good things come to those who wait”