It is the second guest post day, which is the fab idea of Erica at Little Mummy. I took part in the first day and was matched with the fab Kelly at A Place of My Own. This time I have been paired with Rock n Roll Mummy, who has just started blogging at Rock n Roll Baby World. Her post is pretty close to my heart as my wonderful Neice, who will be 5 on Monday is Ginger too
Ginger and Proud
When I was little I didn’t realise having ginger hair would make me the subject of cruel jibes and jokes; as I got older and started middle school I began to realise my hair which I had always loved made me stand out and made me different.

Over my teen years I began to hate the colour of my hair and wished it was just brown like many of my friends not only was it bright red when the other kids called me names my face also went bright red. 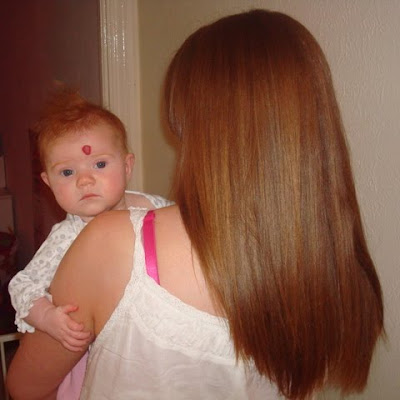 Rock n Roll Mummy with Rock Baby
I had gone through a blissful childhood of my parents and family telling me what a beautiful colour it was and my mum used to dry it for me and spend ages perfecting it for me after bath time as it was so long, pretty much to my bum that I couldn’t do it on my own. I used to love the time we had, whilst she would lovingly tend to my hair, gossiping about my day at school, her grilling me as to whether I liked any boys, and just spending quality time with each other. My mum passed away when I was 17 but I have really fond memories of this time together.

My brother had it worse than me his hair was even brighter than mine and he wore glasses he was particularly bullied and used to get called Duracell by the local school thugs. No wonder he has now shaved his head!

In my late teen years, early 20’s I started experimenting with different colours trying to make it more brown, I went really dark at one point, then I tried highlights but ended up looking like Ginger Spice; nothing really worked for me. Not only was my hair ginger it was like a thick bush not a very glamorous look!

But then something happened in my early 20’s, people kept commenting on how lovely my hair was, I had started seeing boys and they were always complimenting it, I had grown in confidence and started to realise its actually quite cool to be different and stand out from the crowd. I got a new hairdresser who just happened to be male, gorgeous and even better straight! And he told me my hair colour was actually copper gold not ginger and so now when people comment, normally just when they think its for a laugh I firmly correct them well actually it’s Copper Gold. When I discovered GHD straighteners, they literally changed my life. This will probably sound very shallow but when you were the geeky ginger kid at school with a bush for a hair cut only then can you appreciate how much of a difference they make.

It is amazing how much discrimination you can get from having a different hair colour and how victimised you can sometimes feel. I was actually ashamed when I was younger and at many points wanted the ground to swallow me up. Even now music videos like M.I.A ‘Born Free’ are highlighting this in a particularly disturbing video in which US troops are gathering up ginger haired boys and assassinating them. The video is supposed to be art and a symbol of discrimination as a whole but I wonder what impact the video will have on all the children at school who are already the butt of numerous jokes, will this video make it worse for them? 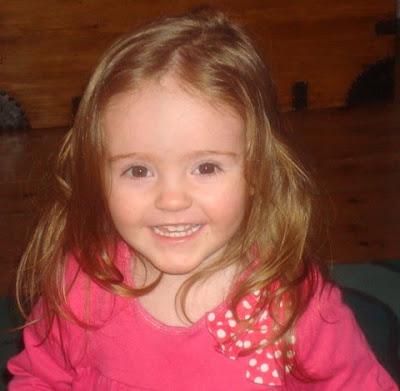 Pop Princess
Then I think about my own children, my two girls Pop Princess who is 2 ½ and Rock Baby who is 4 ½ months. PP was born with a massive mop of thick dark hair and while it does have a red hint she is darker than her little sister. RB on the other hand was born with bright red hair, very much like her mummy. I think she is stunning with gorgeous red locks and bright blue eyes. I just hope that she will love her hair as much as I love mine now and that she doesn’t suffer from the same old jokes and jibes and that society and the media may change their perception. I want her to grow up proud to be ginger!