Skip to content
Home » first day of school » He thrived, I survived

Well today was MaxiMads first day at school. He went to the preschool at the school, but this was his first day in reception, his second time for school lunch and his first full day. 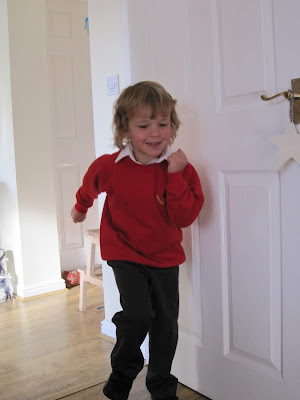 As you know if you read my earlier post, I was not looking forward to this day. In fact I was in complete denial. I was up till one labeling clothes and sorting lunch money and then slept really fitfully, finally falling into a deep sleep just before the alarm went off and slept right though it!
So we had a mad dash to get ready and then MaxiMad would not pose for a photograph and MiniMad refused to get dressed (so went in his PJ’s).
He was so excited to meet up with some of his friends that we haven’t seen over the summer and ran into his new classroom leaving me at the door, whereby his teacher reminded me that there was no parents to come into the class, so I was left bereft, holding on to MiniMad worrying about my eldest, who just isn’t old enough to go to school (in my very biased opinion), just as I was about to turn and go, he popped out his little head and demanded a kiss good bye (that’s my boy).
Me and MiniMad headed home and I held in all my emotion, until I had got him dressed and playing nicely and then I ran to the downstairs loo, which is where I go in times of need) and let it all out.
By 10.20 MiniMad was asking when were we going to collect MaxiMad. He was also joined to me with what seemed like industrial Velcro, so we set to on our Monday Home Blessing (yes Flylady again). We managed to get most of the upstairs sorted before I needed another little sob and then proceeded on eating a very strange lunch (we opted for the kitchen table).
We then cracked on and cleaned and played for the rest of the afternoon, we blew bubbles, pretended we were in a band and played at king and princess (MiniMad being the princess of course).
I decided to prepare a snack for MaxiMad’s return just in case school lunch was not too his liking and also a list of open questions about his first day in Reception and off me and MiniMad went to collect him.
I was amongst all the same people who had been saying that they couldn’t wait to get their children to school when someone spoke to me to point out my top was on back to front (it had been all day) I wished the ground could swallow me up.
So in I went to collect my eldest child and he bounded up to me with a great big smile on his face and his first words were “Can we go to the park mum?”, so off we went.
He and MiniMad spent 30 minutes getting rid of some of their never ending energy and we came home, during those 30 mins he told me what he had for lunch (jacket Potato with cheese, crunchy carrot sticks, red pepper sticks and lettuce, a carton of juice and a biscuit), where his peg is, who he played with this morning and that he got a star for answering a question abut the storey they were reading. He also asked if he could go back tomorrow, which I think means it was a success.
I have prepared him as best I can for school and will be with him everyday throughout this journey that we will take together. All I want for my children is to be happy and it has been hard for me to hand over my precious child to someone who I don’t know.
Things will get even harder for me soon, as MiniMad was due to start Preschool this month too, that I have postponed at least a month for my sanity. Had things been different with my health, I think we would have had a houseful of children. I am blessed with my two wonderful boys and cherrish everyday with them.

6 thoughts on “He thrived, I survived”