I was asked about outside games by the very funny Mr Shev and seen as I didnt have the answer, I asked him to write a post and said that I would throw open the floor to my wonderful readers.
Browsing through the average toy shop, I sometimes wonder what kids did on a sunny day before Nerf, Supersoakers and themed paddling pools.
But then I realise that I do know because I grew up in a world without them and we had to invent our own entertainment. So, we played football, developed innovative ways to kill ants and trawled the streets looking for useful trash to transform into go-karts or even more sophisticated and intricate ways to kill ants (makes me sound like I came from a family of pikeys, but the kids toy market was not as sophisticated as it is today.)
I still don’t know why we hated ants so much. 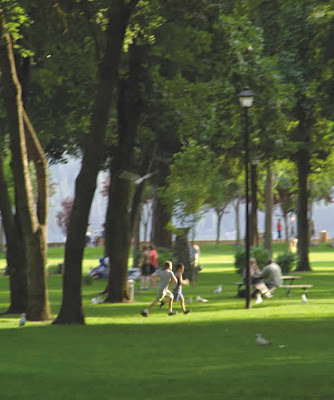 The reason that I have been ruminating about this is because this weekend my Darling Son reached the ripe old age of four. Being neurotically proud parents we went through emotional turmoil about what to buy him (a bike), what to feed him (his favourite: chicken wings), what to do with him (boat trip) and who to invite to his party (everyone). We decided, because the weather is so good, to have it at the park and do a barbecue.
We obviously organsied the ubiqitous, much maligned, steeped in corruption (with allegations of bribery): pass-the-parcel. The kids all knew what to do, even the really young ones. It’s as if there is an infant internet using Leapfrogs or something and they all learn how to do it on web forums in the dead of night.
I did face-painting. *RANT ALERT* I searched high and low in both Swiss and French toyshops for decent facepaints and eventually found a box. They are the worst facepaints I have ever used. They are like proper make-up and if I (an animator, with 7 years of art school tuition and years of industry experience) can’t paint a kid to look like a bloody dragon then no one can. ALSO, they supplied make-up remover because once this stuff goes on it stays on – try explaining that to a 2yr old as you’re scrubbing their face for the third time. FFS.
Afterwards we hadn’t organised a children’s entertainer – NO! – or a ballon modeller – WHAT?! – or a travelling menagerie of animals – EVIL PARENTS! What we did was bring a football or two and left the kids to themselves – BAD, EVIL PARENTS! So, what did they do? Well…
After this lot we ran out of ideas and I wanted to put it to the people: what games do you know that involve minimal props and lots of kids? Explain the game, what it’s called and the rules and let’s compile a list!