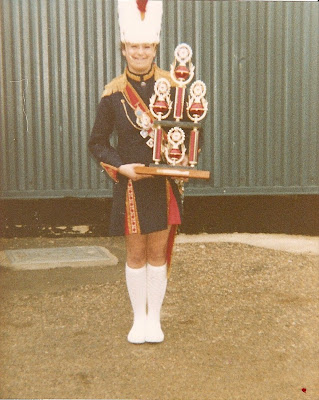 I used to be in a marching band

I used to play the kazoo
yep that awful, awful gold thing
that no one knew what to do
I used to wear a uniform
with frilly knickers underneath
I used to wear a big white hat
with a chain that hit my teeth
Green and white or Red and blue
The uniform depended on what you do
I had gold epaulets and a sash with medals on
My mum and dad were very proud and used to cheer me on
I had a feather in my hat
knee high socks that just wernt cool
This was the secret that I kept
From my friends in school
The thing is that I was good at it
I won lots of trophies and awards
My unform now is all fornlorn
in my mothers drawers
Twice a week we used to practice
in the old pier hall
until the floor became rotton
And the boards began to fall
We walked for miles and miles
not always in weaqther all that fine
I was promoted to Band Major
I swang my mace and ensured that we all kept time
I used to be in a bank you know
It wasn’t cool, it wasn’t hip
I used to be in a band you know
I aren’t any more, so tootle pip