Skip to content
Home » getting Mini » Mini The early weeks

As I said in this post, MadDad took care of all of us for the first week of Mini’s life and he was such a happy baby.  He fed well, burped like a dream or should that be a builder and went back to sleep really well after a feed.  He fitting us like a soft glove. 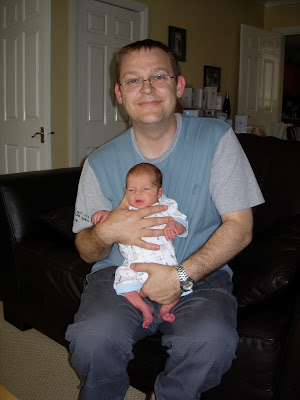 But the peace wasn’t to last.  MadDad had commented that Mini wasn’t pooing.  The midwife told him it was because he was being bottle fed and suggested we change his formula to a comfort one, which he told her we were already using (after Maxi’s colic we made sure we had every angle covered).  She then suggested that he give additional water, as it was a hot summer.  We decided to mention this to the GP when she next came out to me.
She agreed that this wasn’t normal and that he needed to be seen by a pediatrician and went about referring him.  The next day Mini started to vomit, it was not the standard little bit of sick after a feed, it was all his food and it was projectile and it was after each feed, so I rang the GP and she suggested that I take him straight to the hospital and she would ring and tell them to expect us. 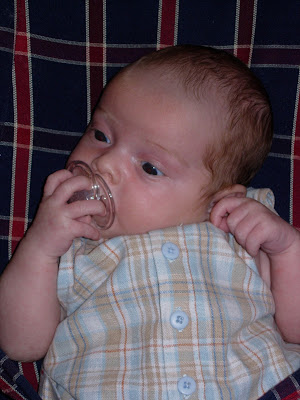 We were admitted to the children’s assessment unit and they agreed that he was getting dehydrated and they wanted him to stay overnight, but before putting in a drip they wanted to try and feed him again.  The staff were amazing, I explained that he hadn’t pooped and the nurse told me to take the bed and they popped Mini in a cot next to the bed.  He was not happy at all, he was pulling up his legs and screaming and I couldn’t comfort him.  So the sister decided to take him to a walk with her and told me to go to sleep.  I woke up at 6am the next day in a real pickle as Mini wasn’t in his cot and within a minute the sister brought him to  me, but he was in just a nappy and she was in scrubs.  It turns out the mini screamed for 2 hours until he poos out his body weight, all over the poor sister.  not only did it come out of his nappy, but it went though all her uniform and underwear. 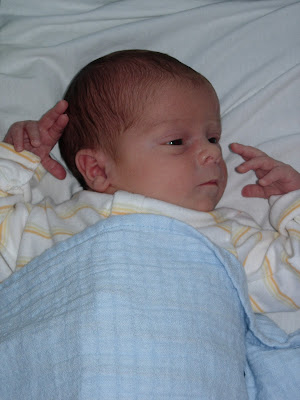 He went from a screaming child to the placid baby we knew after that.  The consultant examined Mini and discovered that he had a tiny bum hole, but they were also concerned that he had other issues too.  So we were referred to a specialist at Newcastle.
3 days later MadDad and I took Mini to meet his new surgeon and to discuss the options.  As he hadn’t pooed since the incident in the hospital it was decided that he needed to have urgent surgery and it was scheduled for the following day, so we went home to pack a bag and make all the necessary arrangements.  I was terrified by baby needed to have a general anesthetic and he was under 3 weeks old.
We were not allowed to feed Mini for 12 hours before the operation, so we set off to the hospital.  I felt terrible, why was my baby suffering in this way?  We were taken to our room.  There was a double bed for me and MadDad and a bot, bath, changing table etc for Mini.  It only really hit home when we were asked to bath him and pop him in to a gown. 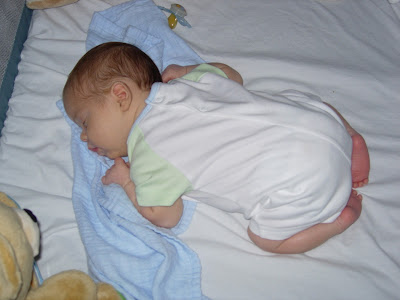 Our fantastic surgeon came in and tried to calm me down and decided that before the operation she was going to have another quick examination and use a special implement to measure mini’s anus and have a quick probe.  As she was doing this we all heard a strange tearing sound and mini suddenly stopped crying.  The doctor removed the probe and then whoose, out cam the poo, which was like water as he had been taking lactulose to try and help him poo.  He lost 4oz in weight in less that 5 minutes and we agreed that we would postpone the surgery for a week and that I would use a shorter probe and medication (lactulose and suppositories) to see if it made a difference. 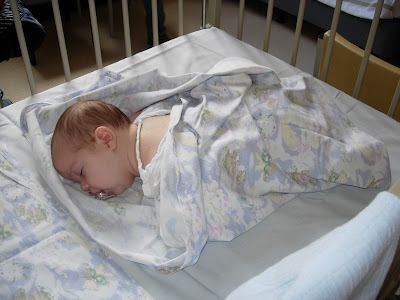 Mini just minutes before the surgeon came in
That week turned in to six months, but it meant that he didn’t need an operation and I am glad to say that he no longer needs medication and our months of carrying 5 changes of outfits were all worth it.
Maxi is fine, he bowels are fine and you would never know that he went though this.  It confirmed to me that Mum and Dad always know best and we learned to trust our instinct implicitly.
He was a joyous baby, a pleasure to be with and the easiest baby in the world.