Mini has the ability to make friends wherever we go, which I assume is is partly down to his generous and happy nature, but also down to the fact that he is just so………………………. unique!
We went to an adventure playground the other day and there were loads of older children there, Maxi went go off and played solitary on the monkey bars etc, but Mini threw himself in to the centre of the most dangerous games with the big boys. 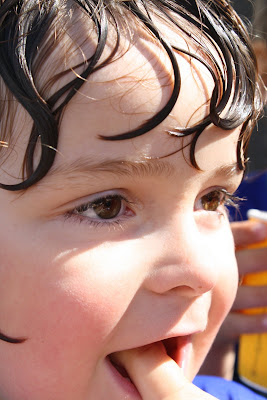 Often I am not partial to the conversations that take place, but this time one of the older boys came over to tell his mum about this “super little boy they were playing with”.
Big Boy “He is so funny mummy, he told us he has a pet mole and his mummy is dead”
Big Boys Mummy “Oh poor thing, which child is it?”
Big Boy “That one with the curly hair and glasses”
Me “Oh that would be Mini, he is mine and I am his mother!”
Big Boy “Oh, he also said he has a brother and wants a sister and is friends with the half inside out people who live on the high street”
Me “Oh yes, that is Mini, he has a very active imagination, think nothing of it”
So this is Mini, the half inside out people are his imaginary friends call Dave and Vic.  They have been around for about a year now, although the pet mole is new to me!  He has always wanted a sister, in fact both the boys talk about how they will get a sister all the time!
But I do feel the need to shout out HE HAS A MOTHER, I AM HERE.  I AM ALWAYS HERE!
But who could resist him, he is just adorable!