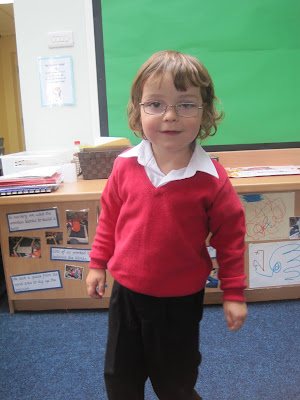 My baby is grown up.  MiniMad his first time at preschool today without me.  It was so hard leaving him there, but he was really happy until 4 minutes before I collected him, when he wanted to come home.  They think that was because he was asked to tidy up.
I am so proud of him, he looked like a little man.  What is it about putting a uniform on children that all of a sudden makes them look at least a year older than they are.
He loves his “work” outfit, as he calls it, although it makes it harder for me in the park after school now, as I have two in red in a sea of many others, at least when he was in his own clothes I could always spot him!!
It is strange not having a child at home with me and it is the first time that this is going to have happened and also the first time in nearly five years that I will have consistent time on my own.
What this means for me is that I will have to crack on with the paid work now!!
I hope that tomorrow goes as smoothly as today did.  The seasons they are a changing.

One thought on “MiniMads First Day at preschool”