Since I am laying it all bare about how I feel about the boys being at school, it is only fare that I really admit as to why I feel so bad. 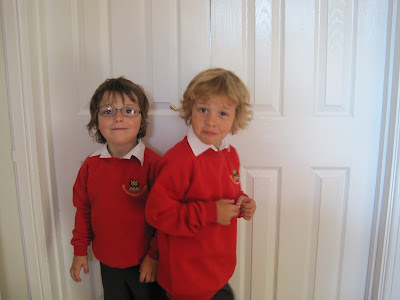 Back in July 2008 I had my ovaries and fallopian tubes removed, an oophorectomy is the technical term.  As you may know I carry a genetic spelling mistake which makes me very high risk for a number of cancers.  My Aunt died from ovarian cancer and my other Aunt who had already had a hysterectomy had primary peritoneal cancer (she is currently in remission).  So my risk of ovarian cancer was over a 60% lifetime risk.
We talked to specialists, McMillan and my family and we knew that the risk of contracting ovarian caner increased if I still had my ovaries when I was over 35.  Also ovarian cancer is a silent killer.  Woman tend to be stage 4 before they are even diagnosed, as its symptoms are often just passed off as women’s problems.   Also there is not an effective screening programme for it in the UK.
So we made the very hard decision for me to undergo surgery.  This decision was harder than the one to have the mastectomy.  My children were hard come by, I had numerous miscarriages and difficulties when pregnant with both the boys, but we always wanted more.  We discussed when we got married that we would love to have 4 children at least.  But we made the choice that it would be better to be alive for the children we already had rather than take a big risk and try for more children.
I though that I was happy with this decision and it is only since Mini has started school that I realise that I am mourning, not only by gorgeous handsome boys being at school, but I am also mourning the loss of future potential children that we might have had.  I am mourning the life I always thought I would have.