Mini loves to write, to draw, to make his mark, so we enable him to do so and he has many a notebook or pad and I was putting one of them away one evening when I discovered a note that made my heart lurch. 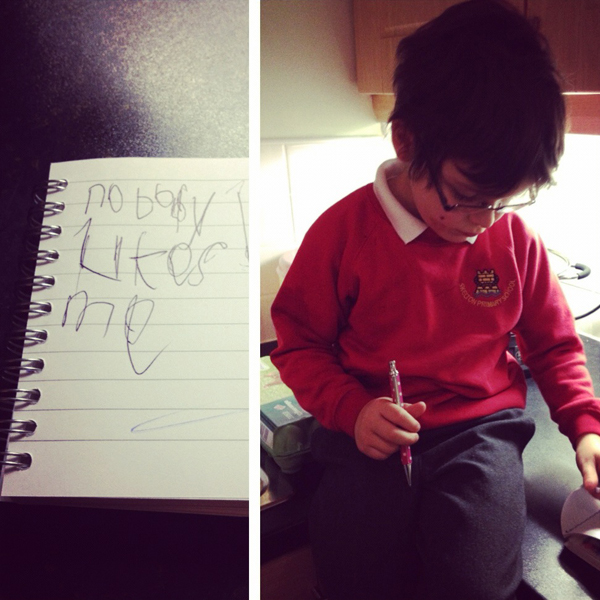 Now you might know that we have had ongoing issues with Mini about going to school since Preschool.  He doesn’t like school.  He doesnt want to go and we have been trying to get to the bottom of this for a long, long time and finding  something like this in your five year old’s notebook, I can tell you is crushing.

I know that we can not always be happy all the time, but at five you should be happy most of the time and you should not be made to feel as though no body likes you.  Initially when I tried to approach him about it, he just ripped the note up and started to cry.  He explained that none of the boys in his class liked hm, but I was at a loss as how to handle it and make him feel better.

But thanks to my lovely online friends I was provided with practical advise that I could put in place and start to work on reframing the “nobody” part of the note.  The wonderful Dawn aka The Moider had some excellent advise “Does nobody really like him, nobody at school? No cousins or kids of your friends. Help him focus in the people that do and those moments he enjoys. The things he does on his own or with his brother or you that are fun. It will help show him that the people who don’t like him are a very small part of a big picture. It’s worth a try.   There is no point disagreeing with him and telling him he’s wrong because it’s his belief. Help him reframe that belief to see the positives”.

The issue is still there, but we are working hard on making changes.  It doesn’t stop my heart from breaking when I think about it though.

26 thoughts on “Nobody likes me”