There is nothing better than winning a medal, well perhaps winning a medal you have already made yourself.  So we set about making own own set of Olympic medals. 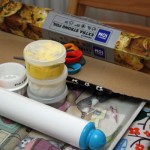 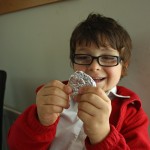 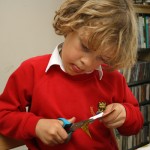 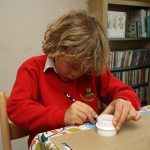 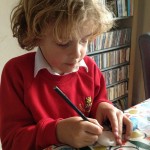 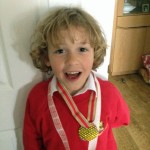 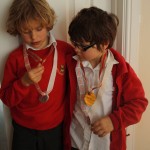 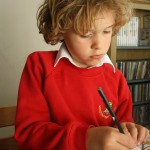 To make our medals we pained or colored them in or covered them in silver foil and then drew our chosen design on them.  To get some inspiration we took a look at the past Olympic medal designs and discussed the symbols and their meanings.   I then punched out a hole in the top and threaded the ribbon through.

We also made some out of filmo and airdring clay.  We rolled out the clay and then cut out a circle with a cookie cutter and made a hole at the top with a straw and drew on our designs.  Dry or bake as per instructions and paint in the appropriate colour and allow to dry before threading your ribbon through.

The silver used in the first and second place medals must be at least 92.5% pure. The “gold” medals must be gilded with at least six grams of pure gold. Medals also carry the name of the sport contested.

The last Olympic gold medals that were made entirely out of gold were awarded in 1912.

The front sides of the medals awarded at the Games of the Olympiads feature an image of a Hellenic goddess holding a laurel wreath with the Athens Colosseum in the background. Since 1972, local Olympic organising committees have been allowed to create a design for the back sides of the medals.

The London 2012 medals, designed by British artist David Watkins, depict Nike, the Greek Goddess of Victory, stepping out of the Parthenon to arrive in the host city. The front side also shows a bowl resembling an amphitheatre, with the medal’s overall circular shape a symbol of the world.

The back side contains a portrayal of the River Thames to reflect London, and a square to break up the medal’s circular design and “emphasise its focus on the centre”.

8 thoughts on “Olympic Learning – Make your own medals”