One of my favourite things about Playmobil is the fact that it is not licensed and that way it seems pretty timeless. A car is a car and an agent is an agent, which with my boys minds means that it could be James Bond or any other person, which is great for creativity and longevity.  Playmobil also is top quality and seems to last forever and the boys have some vintage people that belonged to MadDad.

We were loaned the Robo Ganster Truck (4878) along with the camera and remote control pack, which can be added. 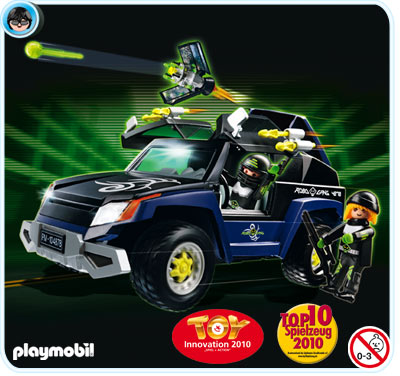 This is a top top and one of my tips for Christmas.  It is great fun for all the family. It is very easy to assemble and a joy to drive and has plenty of added extras to keep any child occupied.  The boys loved the hidden satilitte, which shoots missiles.   You get two people with the set and at £27.16 for the truck good value.  The optional remote control pack is £50, which is expensive, but can be used in more than one vechical as it is interchangable, which is really clever.  The camera, which did make the truck really good fun costs £60.00 and is really clever.

I have to say I have a huge issue with the name of the product.  This is an agent range, why on earth would they use the term “ganster”, it really is beyond me.  We took it out of the box before the boys say this, as I do not want to have to explain that term to them and I do not want them playing gangs at all.

The truck is a perfect addition to any child’s toys, it has been played pretty non-stop with since we got it and the boys are devastated that it has to be returned.  The remote control and camera are a bit of a gimic, but the boys did enjoy them, although they ate batteries!  Great toy, shame about the name. 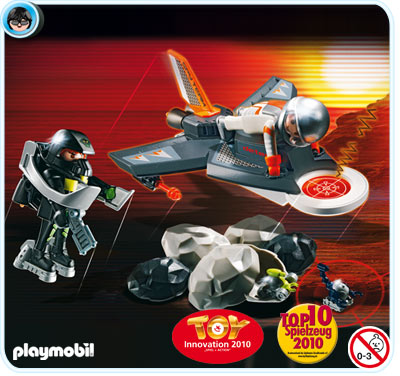 Wow, a toy with a built in metal detector, this was a real hit with the boys, they had so much fun finding buried treasure and the metal detector really ended to the play enjoyment of the boys, but it is also a great toy on its own too.  This set came with two people, one with a special jet pack, which fired the boys imagination no end.  They loved the open-able rocks you get with it and the metal nuggets you can hide in them.

I am not sure how I feel about Playmobil having batteries and all that jazz.  Part of the reason I love it, it due to its simplicity and the fact that it fires imagination with out the need to added extra,s.

At nearly £18 it is expensive for a small toy, but I guess the added extra of the metal detector is what puts the price up.  Again this is a toy that the boys will get a lot of play out.

Disclosure:  We were loaned the truck and accessories and provided with the jet