We love making pom poms.  I find it so relaxing and perfect for making with the boys when we are sitting and chatting.  This simple pom pom pumpkin garland makes a fun seasonal decoration and you could add little felt faces if you wanted to transform it into a Halloween garland. 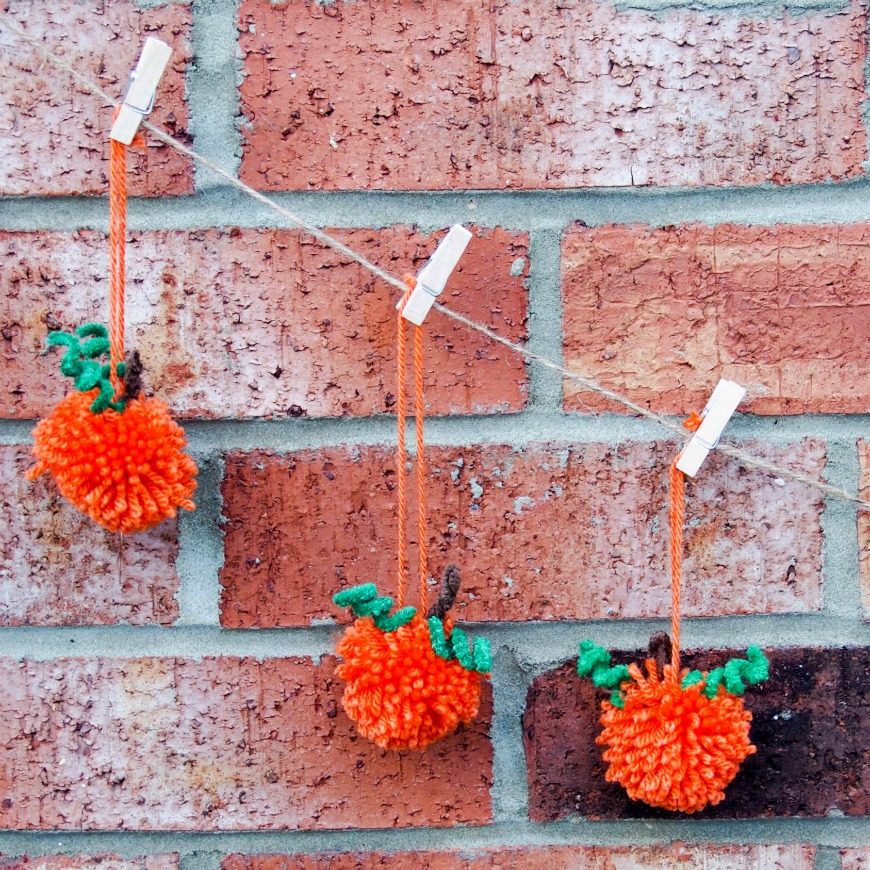 We are big fans of Clover Pom Pom Makers.  They come in a variety of sizes and transform the way and speed you make a pom pom.  They are so simple to use.  below is a rally short video from a few years back of making demonstrating how to use them. 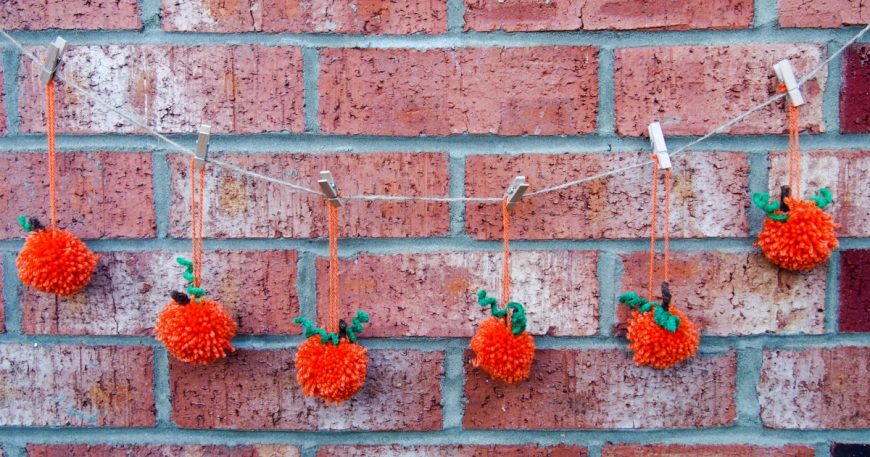 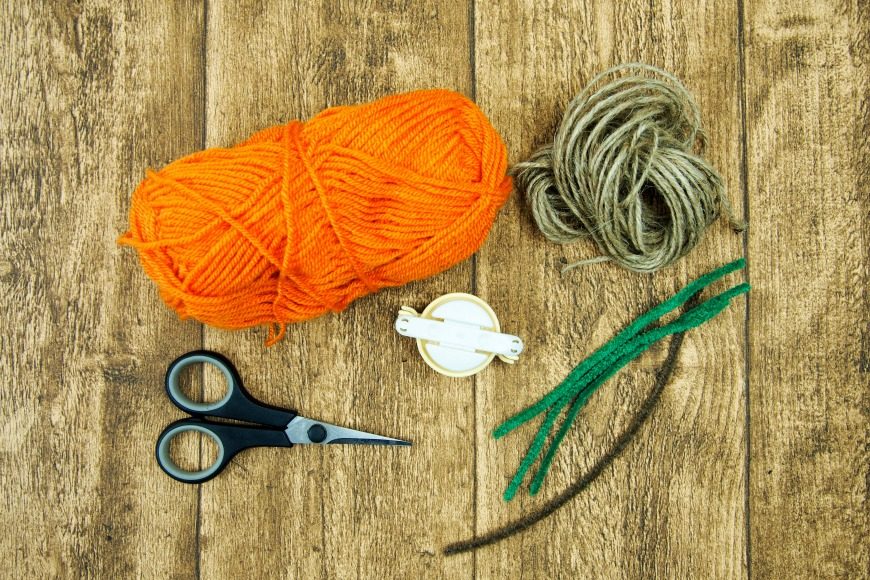 These pom pom pumpkins were inspired by a post by Maggie at Red Ted Art for Pom Pom Apples from a couple of years ago. To start with you need to make your pom poms.  We used some bright orange yarn and our medium pom pom maker. 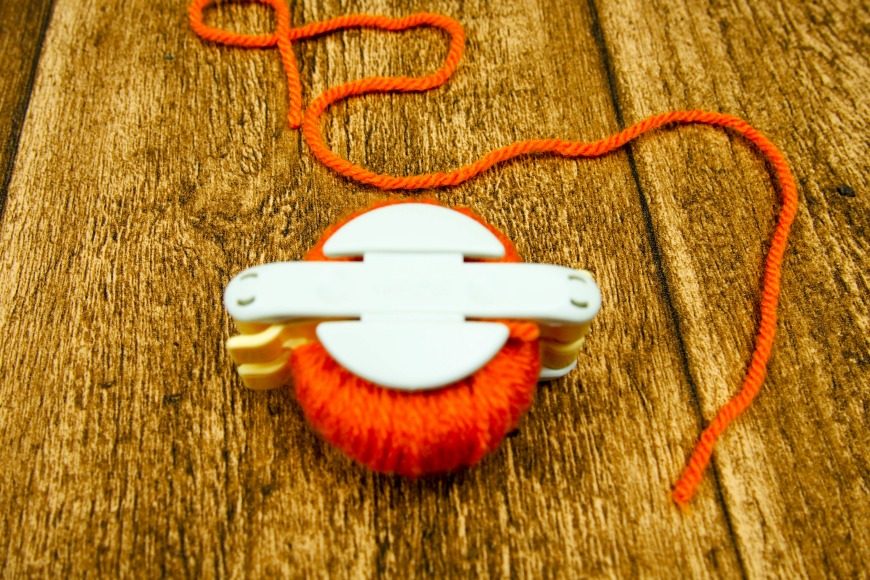 Wind the arm of the pom-pom maker with your orange yarn until full and then do the same with the other side. When the arms are fully wound, close back the arms to their original position. Use a pair of sharp scissors to cut the circumference.  Tie with a yarn or strong string which you can pull real hard to tighten the Pom Pom.  Open both arms and separate the Kit from the Pom Pom you have made. 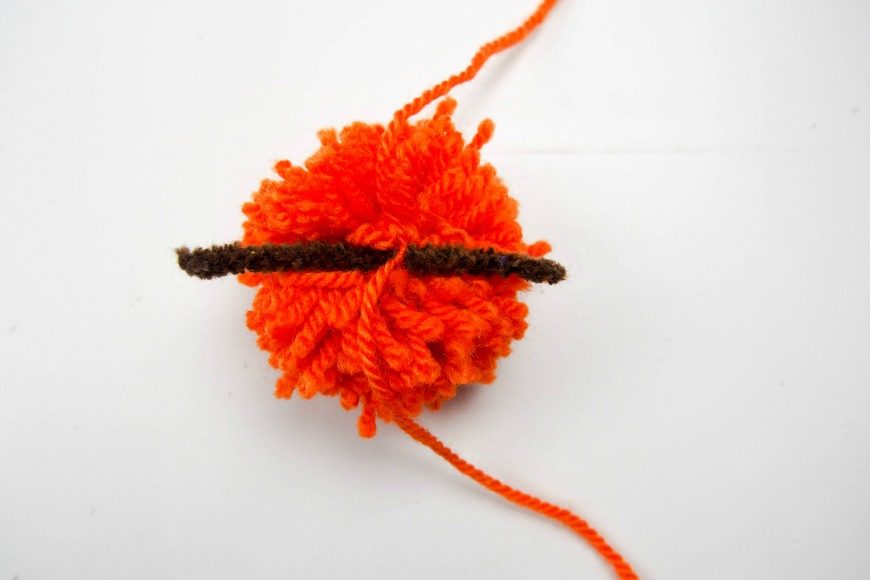 Once you have your pom poms then you need to add the leaves and stem.  We used a brown pipe cleaner for the stem.  We cut them to around two inches in lenth (twice as long as you want the stem to be) and then tied them to the pom pom with the yarn that holds the pom pom together. 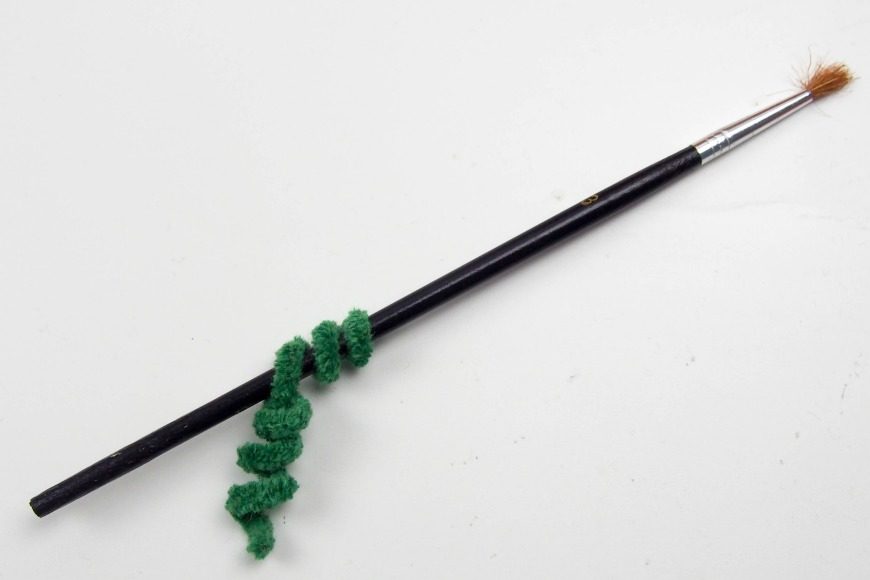 Then using a green pipe cleaner we made the leaves by wrapping them around a paintbrush with a thin shaft to create the spiral before twisting the brown pipe cleaner around to secure it in place. 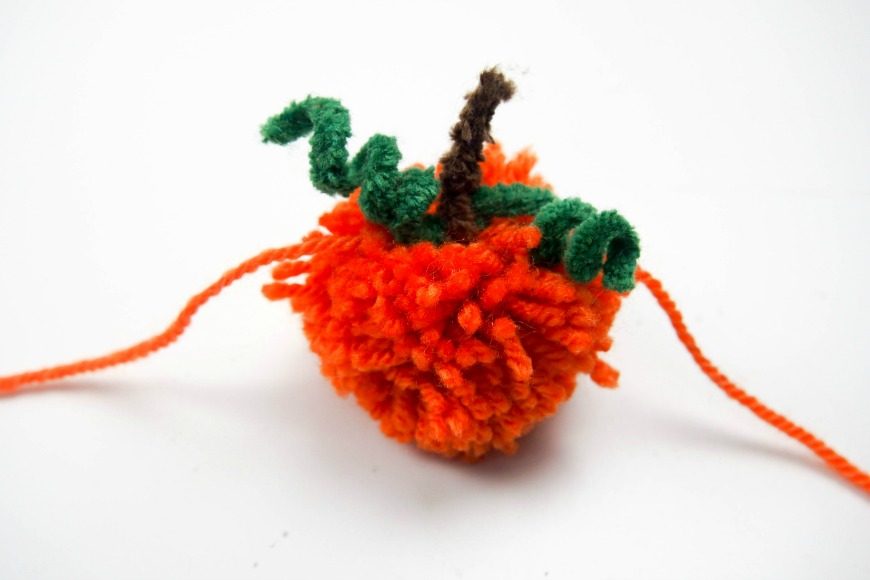 We kept making pom pom pumpkins till we had enough for our garland.  Some of them had double leaves and some single. 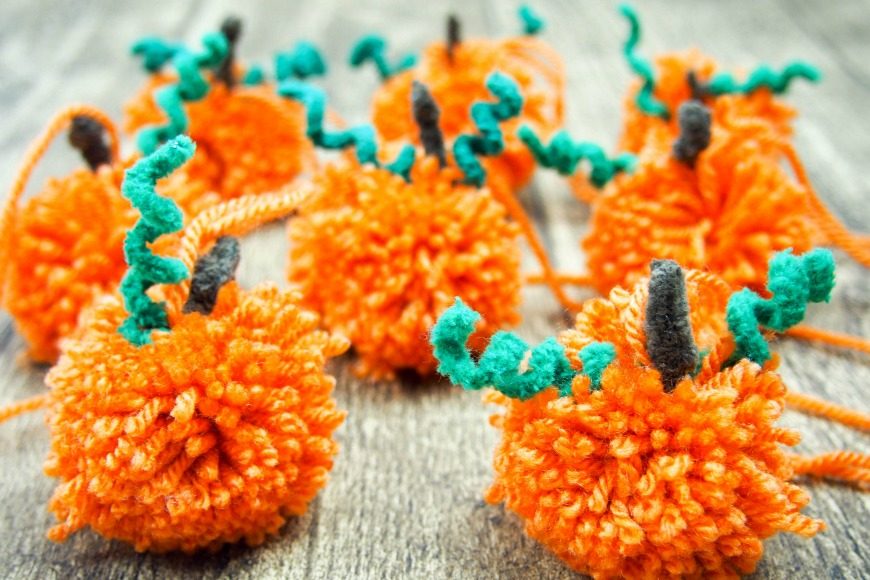 You could then hang your pumpkins from a branch or cut the longer piece of yarn and use them to decorate. They are really versatile and you can soon whip up a whole pumpkin patch. 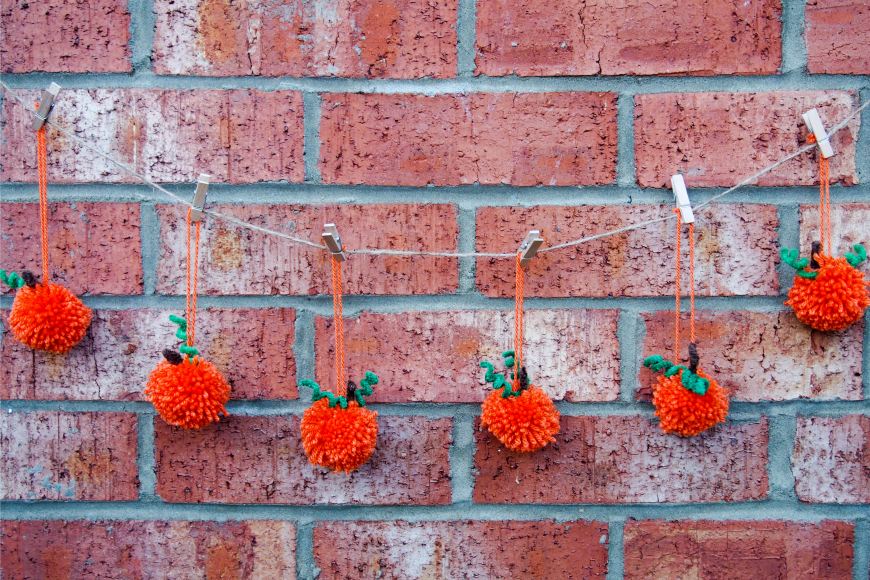 As we might want to use our pom poms differently we decided to peg them to a piece of string with tiny wooden pegs turning them in to a garland. 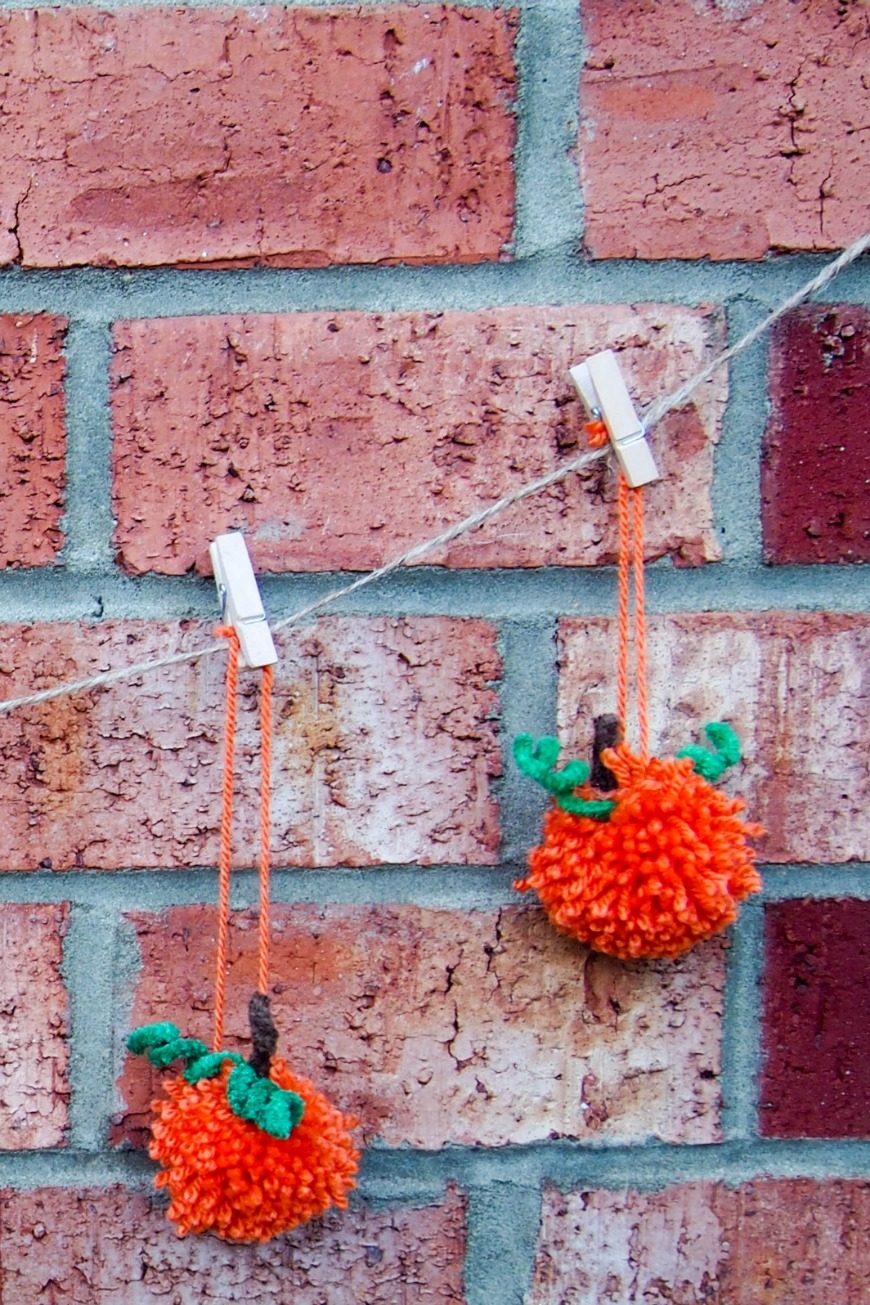 I love them.  They are just such a fun decoration and a great thing to make with kids as they are perfect for working on fine motors skills.  In fact, I find it really therapeutic making pom poms!