We have always tried to bring up the MiniMads with positive praise and decided early on that we didn’t want to smack them, as we believe behaviour breeds behaviour, however, we are finding that this can be a challenge.
Things slipped somewhat when I was in and out of hospital and physically not well enough to do much more than issue a well done or a reprimand. It turns out that the key to success for us is CONSISTENCY.
We have tried the reward chart route, but found it didn’t work for us, unless it was something the MiniMads wanted really bad and they don’t want for much, like most of today’s modern children, so whilst reading through the blogs I love I came across this by Amy from The Idea Room, which is all about rewarding and reinforcing the positives, whilst not ignoring the negatives and it is a fun way of learning too, as the points equal prices (as Brucey would say). They shop is full of things like small cans of pop, sweets, crayons, popcorn, small Lego (which we got as a giveaway from The Mirror last year) and pound shop finds.
Each item is labeled with a coloured star for the number of points it costs. 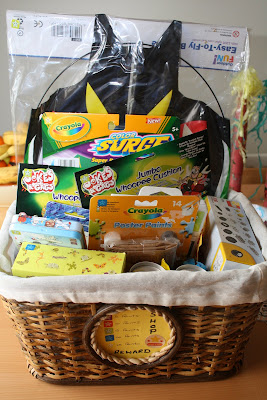 I wanted to make it crystal clear on some of the things we get points for to reinforce good behaviours and things that we would like to become second nature to the boys, so I produced a chart showing this in images and words (MiniMad’s are only 3 and 4, so I try and use imagery as much as possible). 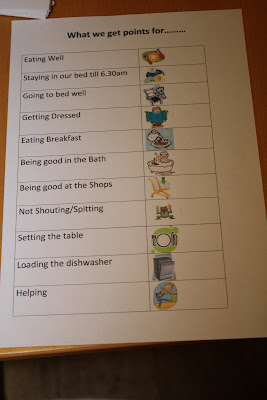 It is such a cool and novel idea, that I copied it pretty much in its entirety and you know what we love it, so do the boys. The shop has opened up two Fridays now and they had had great fun picking their items, but what has gone down best of all has been the reward cards, they both love the fact that they get their special cards for “Board Games”, “Bubbles in the Bath” or “Wii Time”. It has helped us focus on their good behaviour and the times when they really shine. 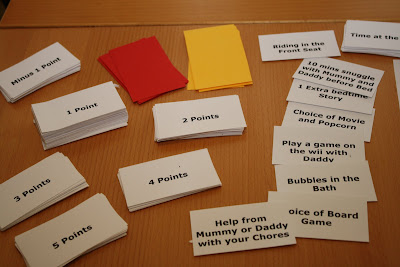 We also had fun producing a special place for them to store their cards, I have hung these and the points information in the kitchen on their art wire. 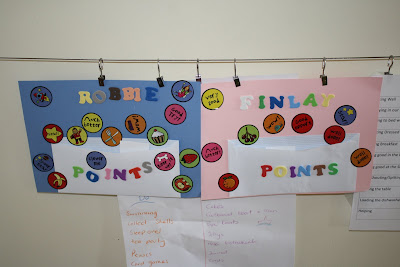 It is by no means a magic button, but it has made me and MadDad more aware that we need to praise the good, in addition to punishing the bad.

We also operate a final warning system of Yellow and Red cards, which appeal to the MaxiMad as he has just started Football Tots. If they do something that we don’t approve of they get a yellow card or final warning and then if they repeat it then it is timeout (4 mins). There is also a list of things that are immediate timeouts ie hitting and spitting.

We both make an effort to explain the consequences of their actions, so that they are aware that things happen because of them too.

However, one thing we are really struggling on is bedtime, both boys went to bed and sleep no bother until I was hospitalised, now every evening is a nightmare. We do our routine of bath, PJ’s story and snuggle, but they keep getting up and being deliberately naughty – HELP