A mothers secrets has asked for any experiences on pregnancy lows this month.  I have never posted about my pregnancies with the boys so thought I would participate.  Just a disclaimer before you read on, it doesnt seem all that bad or dramatic now.
What can I say about being pregnant, it was a hard road for us to get MaxiMad and MiniMad, Maxi particularly. I had suffered numerous miscarriages, including twins at 20 weeks and a molar pregnancy, which meant that I had to have blood tests monthly for two years. So MadDad and I put being and getting pregnant out of our minds and enjoyed our life as a couple visiting lots of lovely places, working hard and loving lots. We decided that after 9 years of marriage that we would move house and so committed ourselves to a whopper of a mortgage and bought our dream home in Berkshire. Well you know what they say new home, new baby, well in our case it seemed to prove right.
I started to be very very sick and thought I must have a vomiting bug, so went off to the GP, she insisted on a pregnancy test before prescribing me anything and lo and behold I was pregnant. To say we were shocked was an understatement. But at least I left the doctors knowing that the sickness was just morning sickness.
The thing was the morning sickness was really all day and night sickness and I became very dehydrated and unable to keep any fluids or food in and was diagnosed as having hyperemesis and admitted into hospital for IV fluids. This pattern of sickness and hospitalisation went on for 4 weeks before the doctors found an ant sickness drug that afforded me some relief, well it meant that I was only sick about 5 times a day instead of the constant vomiting. The only thing was for it to be effective for me I needed to have it injected 3 times a day into my bum. So my wonderful husband offered to do this for me so that I could come home. So home we came and we also tried every alternative therapy know to man to stop the nausea I was constantly suffering.
So we continued through things as best we could, no one at work knew I was pregnant, they must of thought I was seriously ill as instead of putting on weight I was losing it, but my boss was very supportive and understanding. I got to 20 weeks and then all of a sudden I turned yellow, not pale yellow, but a really vivid yellow. I also started suffering intense pain on my right hand side, which we put down to all the vomiting. Anyway to cut a long story short I had an issue with my gall blander and liver and a consultant obstetrician and surgeon decided that I needed to have an operation to ensure both my safety and that of the baby we were carrying. So after many tearful nights, I underwent surgery under a general anaesthetic to remove my diseased gall bladder and check out my liver. I was so scared, I was sure something bad would happen, but it didn’t and as soon as I came round from the GA I had a scan to show that the baby (who we found out was a boy that day) was fine.
Anyway I continued through the rest of my pregnancy with a permanent sick bag and vomiting became a normal part of everyday life. My colleagues at work were great about it and we even moved 600 people into a new office when I was 37 weeks pregnant.
I was booked in to see the obstetrician for one of my regular visit and scans on that Monday, I was 37 weeks pregnant and vomiting more frequently again, so the decision was to bring me into the day unit and do some readings, bloods and monitoring. I never managed to get out of the hospital. I spent 5 days on the labour ward in the birthing suite at the Royal Berkshire hospital on a drip waiting to be induced and it was a really good job I was there, as I have a placenta abruption and MaxiMad was born at 12 noon on 16 March 2005 by a crash c-section. Thankfully the staff re-acted super fast and both MaxiMad and I were fine, well as fine as you can be after a pregnancy like I had.
I was unable to breast feed, as I needed to be put on medication for the vomiting and liver function issues, but I had the most wonderful, perfect boy, who we names after my deceased father.
And when I got home I was overjoyed to find out that MadDad had managed to paint the nursery, put up the hesitantly bought cotbed and buy the pram we had looked at, all this whilst spending nearly every waking hour at the hospital with me.
I was left thinking I would never, ever have another baby and that MaxiMad was to be an only child. But fate stepped in and I started to feel dizzy and sick, but put it down to the stresses and sleepless nights of having a new baby, but no you guessed it I was pregnant again. I suffered with the sickness again all through my second pregnancy and had thrice daily injections in my bum, but I got through it and MiniMad was born by c section at 37 weeks on 24 June 2006. 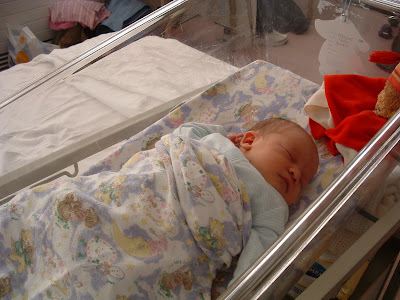 I have been blessed with two wonderful children, who have no idea how hard having them was and who I have no intention of telling them this story until they are a lot older. They are a joy and bring so much light to our lives. Yes my pregnancies were horrendous, but we managed. I might have said some things I wouldn’t repeat about being pregnant, but I did it and they are here. 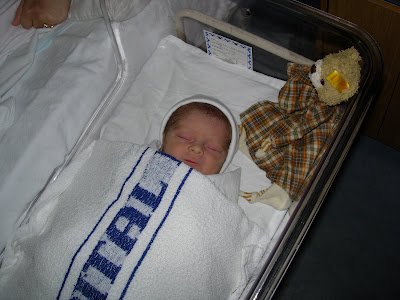