Skip to content
Home » cleaning » Professional Oven Cleaning – Is it Worth it?

Professional Oven Cleaning – Is it Worth it? is a paid collaborative post with Ovenclean. I had often wondered what the fuss was when it came to having your professional oven cleaning. I had heard so many people rave about it, but personally just couldn’t justify the cost.  Well, I couldn’t have been more wrong. It seems that this was a secret club that I needed to be part of and now I have joined there is no going back! 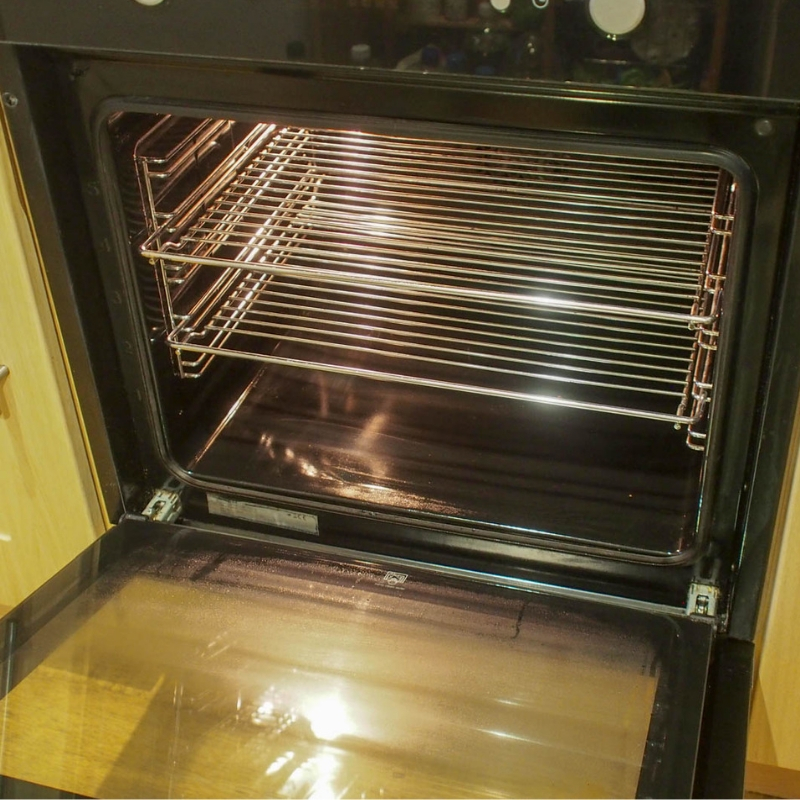 Professional Oven Cleaning – Is it Worth it?

I have never considered my oven to be filthy, dirty yes, and well used, but I do clean it every now and then and it is not a job I love.  I am not one for harsh chemicals and had always thought that professional oven cleaning would involve using caustic chemicals to get the outstanding results they seemed to achieve.  Again, I was wrong. The main thing that is used is sheer hard work and elbow grease. It seems knowing what you are doing makes such a difference.  I had my oven professionally cleaned this week by Richard who is our local Ovenclean franchise. If I had paid for it it would have been £45 and I can tell you that I have already added it into next years calendar for a repeat performance. 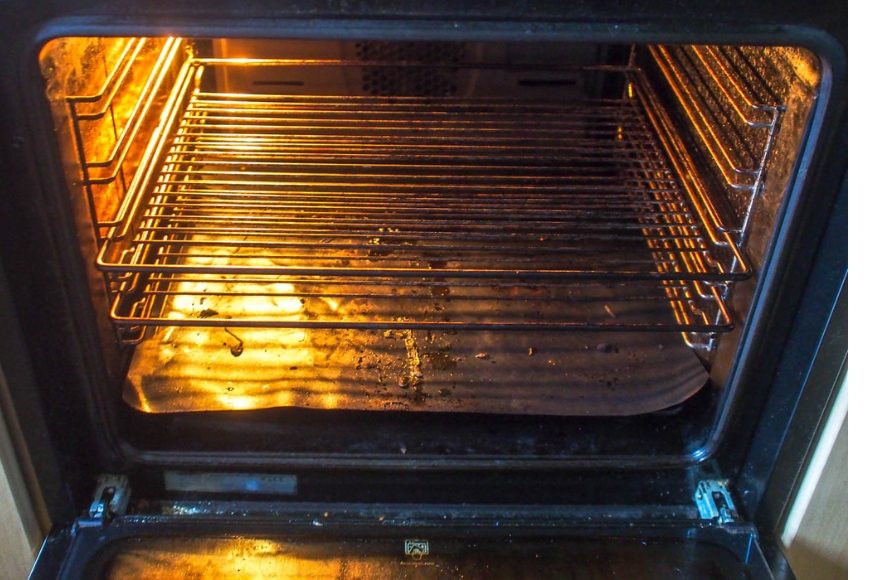 He was here for 1 hour 20 minutes and my oven is now as good as new.  I am super impressed and he didn’t use any caustic chemicals at all.  Just washing up liquid, water, degreaser and natural products and lots of expertise.  He protected my floor and cleaned up after himself.  All he asked for was buckets of water to take out to his van meaning not even my sink was used.  I was able to just get on with my work and pretend he wasn’t there. All I could hear was the occasional grunt as it is really physically hard work. 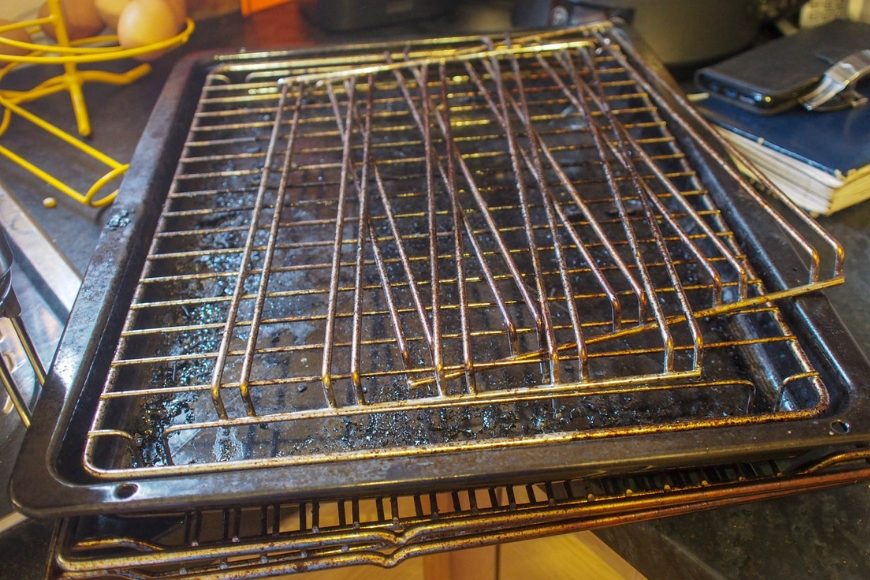 After removing the shelves, side panels, side supporting racks, back panel and even the fan and racks and taking them to the van. Yes, even the fan, which is now sparkling and like new again.  He didnt even walk through my house, he used the back door and gate to get to and from his van. 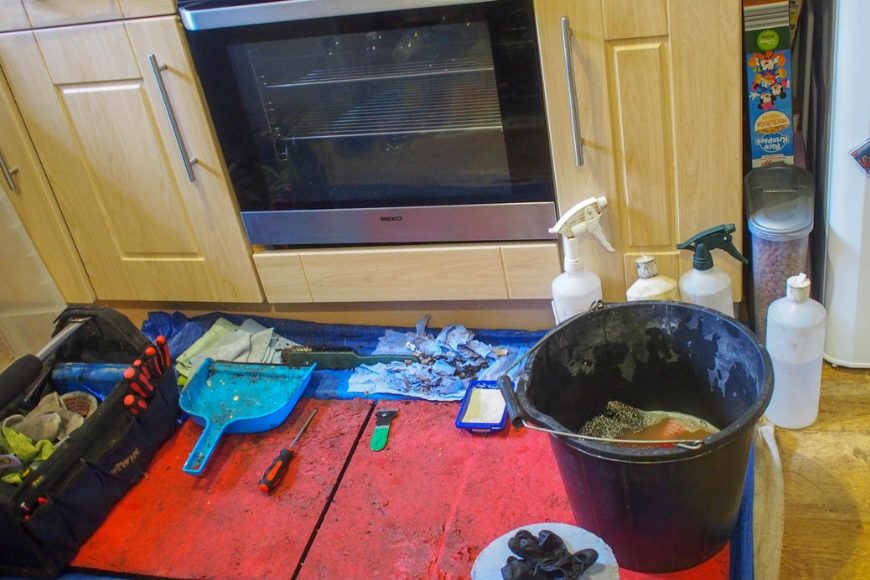 I love that there was no smell, the oven can be used immediately. It is the little things that make the difference, now the oven light is so clean and works so well.  The cleaner checks all the seals and the efficiency of the fan.  Things that I wouldn’t know if they were intact or not.  Plus he knew all the little tricks for cleaning the areas that are hard to get.  I was astounded at how much muck there was (even though we use a liner) and better still he took all the muck and rubbish with him and didn’t even put it in my bin. 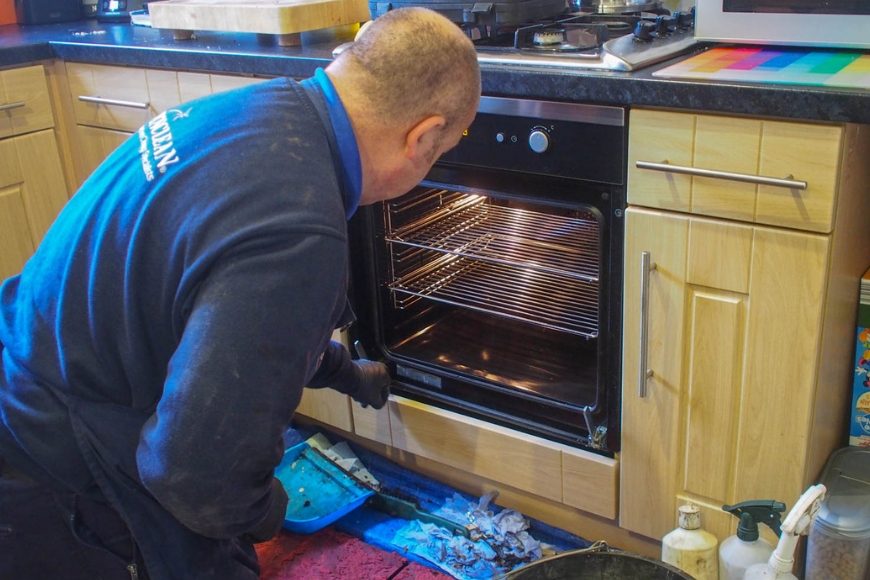 I really can not express just how impressed I was.  I keep raving to everyone about it! 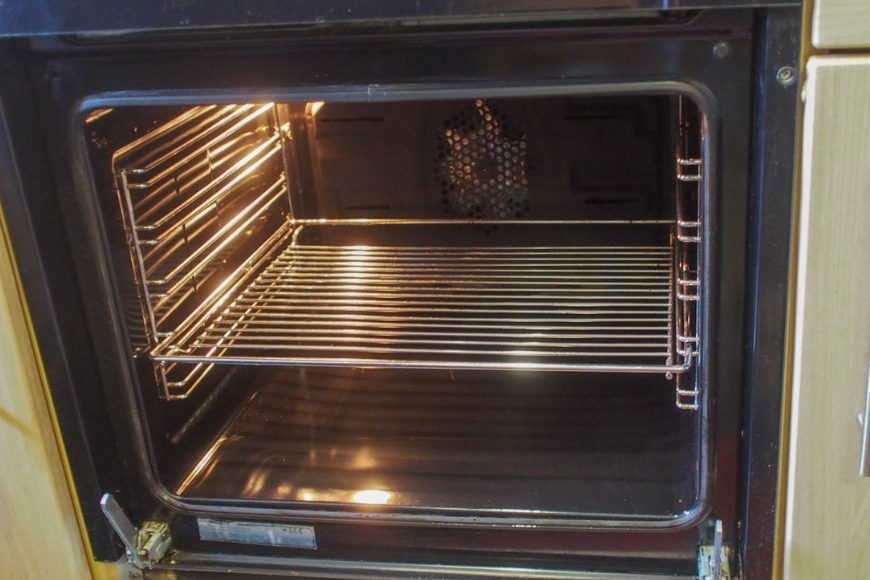 I have friends that use a well know cleaner (the one with the bag) on a monthly basis and even at the cheapest I have seen (You can get it from £2.00 to the RRP of £3.99) it that adds up to £24 a year without all the time to do the work.  So honestly £45 for the products and the time involved is real value for money for me.  When I clean my oven with bicarb and washing up liquid (I told you I hate chemicals) you need to leave the paste on for 12 hours and soak the racks for about the same. So it was great that my oven was only out of use for an hour and a half.  One of the most common ingredients in oven-cleaning products is sodium hydroxide (more commonly known as caustic soda), which can burn skin, damage nostrils and lungs, and irritate the eyes. It will also damage rubber seals and some metals, so it’s vital to follow the manufacturer’s instructions to the letter. 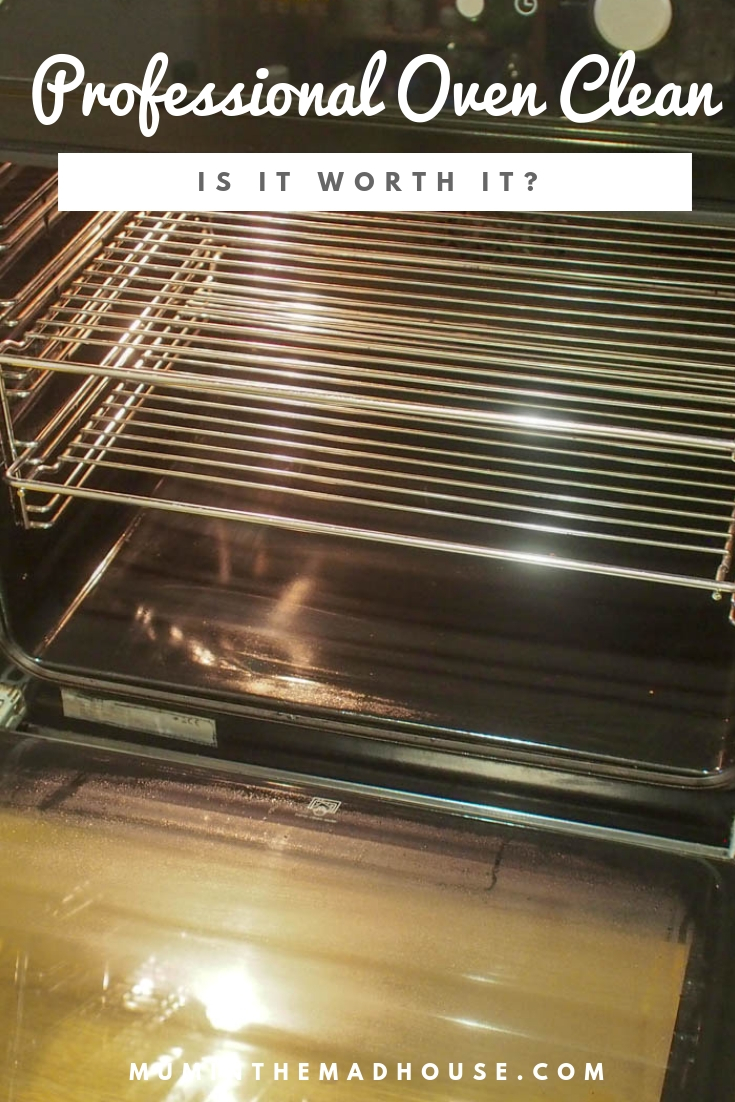 Should I get my oven professionally cleaned?

I will be having mine professionally cleaned annually from now on. 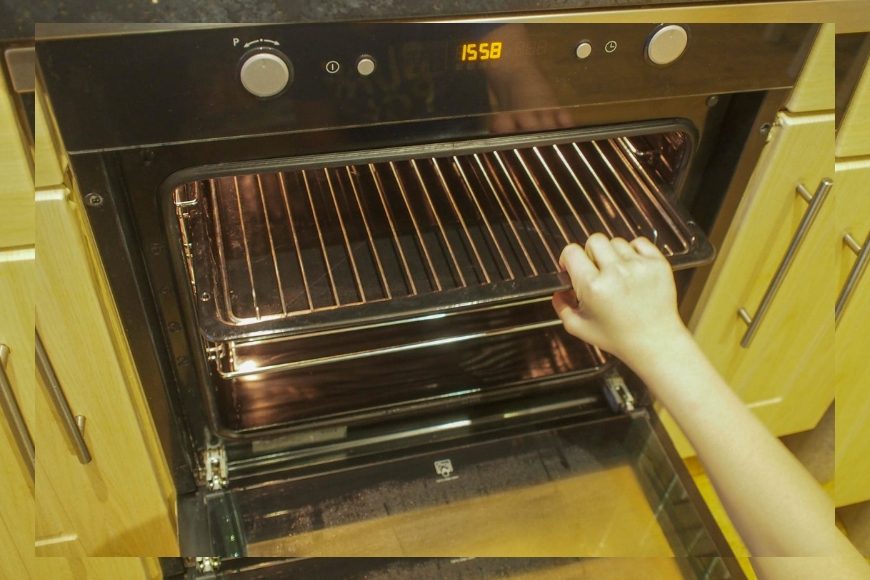 The funny thing is, I was chatting on an online mate this week about how impressed I was and she had booked her annual oven clean in and wasn’t at home when it was done and her husband was so impressed that he decided to prepay and book to have three items cleaned a year (as they also clean BBQ’s, Hobs and Microwaves)! 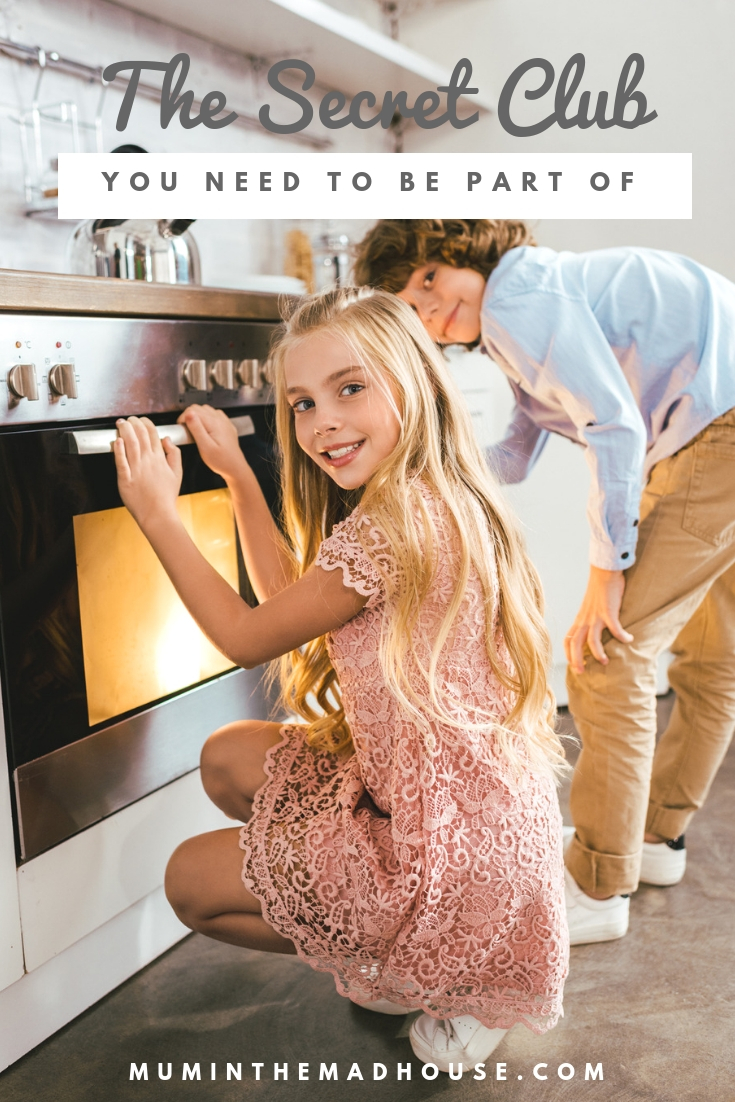 Have you had your oven professional cleaned? Would you considerer it?

One thought on “Professional Oven Cleaning – Is it Worth it?”