Yesterday we made the decision that we have been dreading making, but both knew was coming, we had to have our beloved cat Mr Smudge (our rather large and old white cat) put to sleep.
He was 15.  He was my first baby, one of two brothers that we got after I miscarried twins at 20 weeks 15 years ago.
He had been with us through thick and thin and we couldn’t bear to see him deteriorate in this way and decided that the time had come to stop looking for what was wrong and let him die with dignity.  To save him from further pain, to learn to live with the pain that it meant for us.
So whilst me and the boys were out yesterday, MadDad took him to the farm vets and today we will be having a little funeral service for him, as requested by Mini.
MadDad will be digging a rather large hole in the garden and we will be laying both the cats to rest (as we lost Snowey 3 days before returning to the north east and had him cremated) in their blanket and placing a bird bath over the area.
I have to say both the boys were very brave, pragmatic and realistic about Mr Smudge dieing and being unwell.  Mini even want to see him before we bury him (we are undecided as what to do about that yet).
The thing is my heart is breaking.  I keep imaging I am seeing him round the house and I guess that feeling wont go away any day soon. 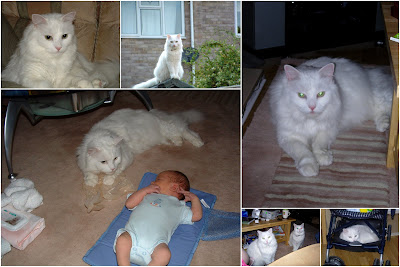