John Lewis is asking parent bloggers to share their ‘Rules for a Perfect Family Christmas’, so not to feel left out, I though I would add my rules too.
Children 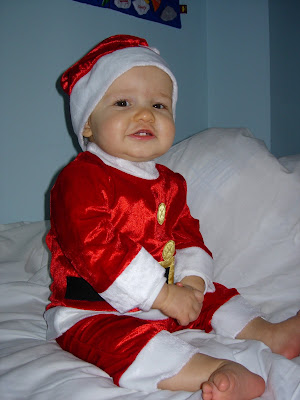 Christmas is a time for children.  So we make it as magical as we can for them.
We dress them up to take lots of Photographs (that is MaxiMad above)
We make reindeer food and sprinkle it outside.
A Carrot, mince pie and milk (no drinking and driving) are all left out for Father Christmas
We hand a special key so Father Christmas can get in as we have no chimney
The Christmas Elves leave new night wear for everyone on Christmas eve.
Stocking can be opened before breakfast.
Children must not fall out of bed Christmas night – MaxiMad broke his collar bone last Christmas Night!
The Christmas Meal
OK if we are having Christmas at home, we have a very relaxed  and modest meal of Turkey and all the trimmings, but this year we are going to the outlaws – I am already preparing myself and the mini’s for what we will receive.
Now my MIL is not the best of cooks, she is a fantastic baker, but cooking well that is another matter.  My Father in Law takes control of the meat, so the turkey will be wonderful, infact it will be one he has plucked himself (he is a farmer), we will also have pork too and Yorkshire puddings.  But the veg, urgggg.  The cauliflower will be so overcooked it will be pink, we will have processed peas,  soggy sprouts and salty carrots.  This will be followed by a delicious Christmas pudding (I know this as I make it)!
The In  Laws
Or the Outlaws as we call them…….  My inlaws are of farming stock and milking doesn’t stop for Christmas, so Christmas’s day is run like a well oiled machine.  Lunch is served at noon on the dot, with dinner at 6.00pm.  The pots must be washed as soon as you have eaten and then they retire to the sitting room to watch TV.
My Family are a little less rigid, but we have our foibles too.  We are having Boxing Day at my mothers, so it will be steak and chips for all and this will be followed by family game time, boggle, domino’s and now that my mother has a wii, we are taking along some games for that too.  My brother, sister in law and niece will also be spending the afternoon at my mums, so it will be a real family affair.
Entertainment
Entertainment starts early in TheMadHouse, there is usually “Carols on the Green” in early December, which the residents association put on.
The Nativity play in school (Maximad refused to dress up, so is not in a staring role again!)
Then Christmas Eve comes, where we string popcorn and eat most of it which watching a children’s Christmas film.
The entertainment on Christmas day comes from watching MadDad wrestling with all the packaging on the children’s toys!
Decorations
I am a Christmas Baby myself (20 December) and the rule used to be no decorations until after my birthday, but now I have my own children we start decorating around the 1st December.
We collect a new bauble for the tree every year.
Many of our decorations are home made by the MiniMads
White lights outside only – now yes outside lights are a contentious issue.  I come from an area that made the national news about 6 years ago due to hate mail sent on an estate staying that the Christmas Decorations on houses were “lowering the tone”.  So we only have white, but the minimads take great joy walking and driving around the local area gawping at other peoples!!
The older the better – I have a plastic 1960’s Father Christmas that is from my mums and I love it, he brings back so many memories.
We have an artificial tree, as we wouldn’t want poor Mr Smudge to get needles in his paw, as he did the year we had a real one!
To read more about our family tradition see here
This is a sponsored post

8 thoughts on “Rules for a Perfect Family Christmas”