Before Christmas we were sent a Snow Boogie Inflatable Sledge to review.   The  poor penguin sledge has sat in our garage waiting patiently for it to snow.  Now has it been last year we would have got loads of use out of it, but so far this year nothing.  Until Saturday night, when it started to snow. 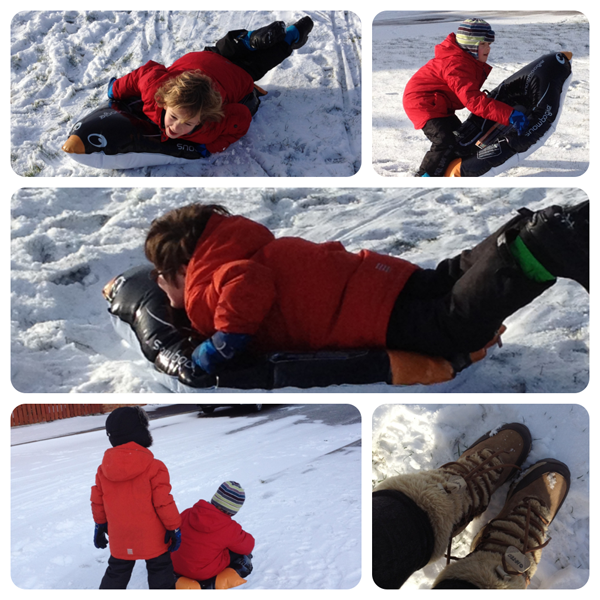 Sunday morning the boys were up bright and early (6am) and raring to get outside.  being the good neighbour I am, I kept them inside until 9am and then we all went out with the Snow Bogie Inflatable Sledge too.

We used a pump to blow it up, which took about 3 minutes.  The sledge is lightweight and very easy for the boys to carry and they had a whale of a time on it.

The sledge comes with 2 patches, which was good as they managed to burst it after an hours play, but then they were going pretty fast on it and all the children in the neigbourhood wanted to use it as it was faster than theirs!  MadDad had it patched and back inflated within 20 minutes.

The sledge is 44 inches in length and is made from durable cold resistant  PVC vinyl with a sturdy handle on each side. It took 3 minutes to inflate the sledge by pump but it doesn’t have a no return valve so the air comes out if you do not get the stopper in fast.

The sledge is currently on offer at £7.49 and is great as it packs away small so takes no storage.