I have really struggled to find something other than read to pass the time with this stupid broken arm, but as the weeks have slowly past I have gained a little more movement and set about making my Mother in Laws bothday gift, a couple of hand embroidered tea towels.

It has been a long time since I embroidered, so Mini watched me intently and then pipped up.  “I want to try to Mamma”

I didn’t need asking twice and we popped upstairs to pick out an image and for him to trace it out using a heat transfer pencil.  I then transferred it on to his own tea towel and I set to work teaching him backstich, which is a really simple stitch.  I showed him on my tea towel and he picked out his own colour thread and then set to work on his own.

It was a real joy to watch my little boy concentrating so intently on doing something.  My whirlwind actually sat still and put his mind and hands to stitching and it was such a wonderful thing.  He learned that mistakes are easy to fix and that he had a new talennt.  The more he embroidered the bigger his smile got. 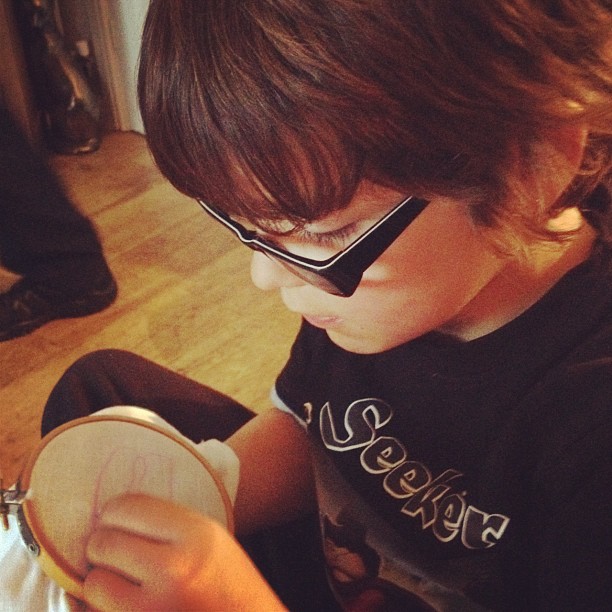 All in all it took him 45 minutes to complete his macaroon and when he did, he asked if he could have his own stitching kit for his sixth birthday (which is on 24 June).  Mummy best get busy then making the little man his own needle book and putting together a little pack all of his own.

I will show you my finished products after the Mother in Law has received them!