MadDad may not have driven Maxi around each night to get him to sleep, but he did carry him everywhere! I know that the thing we both found hardest was the lack of sleep. MadDad found it really hard to wake up in the night. He had a “dead to the world” time between 12 midnight and about 4.30am, when he just couldn’t be woken. This was made all the worse when Maxi got unwell and I stopped sleeping as I was so worried about him. In the end it was suggested to him by our amazing baby massage coach that he slept in the same room as Maxi on a Friday night and hopefully by the proximity and the fact that he didn’t have to get ip in the morning he would wake before I did. And you know what, this was a real turning point for both of us. It meant that I got one nights great sleep a week. He managed to wake up before my “mummy radar” kicked in and the pair of them were often to be found in Salisburys outside the Starbucks concession as it opened on Saturday morning.

So for all the Dad’s out there, this one is for you. Enjoy 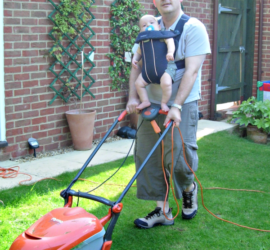