If you are looking for Halloween activities for half term then you have come to the right place. Halloween falls during half term this year so I have gathered together some fab activities that you can do with the kids on a Halloween and Autumn theme. 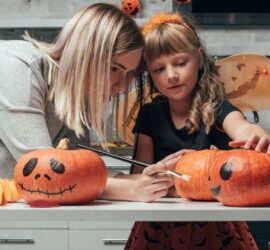 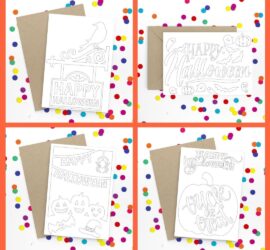 I love any reason to celebrate and if we can not trick or treat this year, then I am certainly sending Halloween cards and these free printable halloween cards to colour are fun for all. How ace would it be to give one to all the key workers that you know.

Not everyone loves Halloween and these free No trick or treaters signs for you to print are to help ensure that your wishes are respected especially during these difficult socially distanced times. 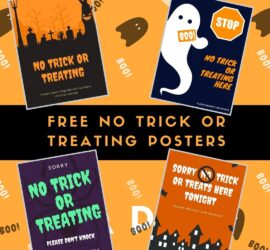 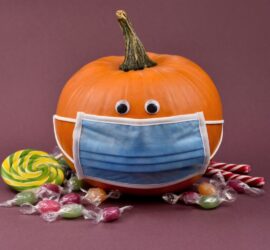 One thing is for sure Halloween will not be cancelled due to Coronavirus, however, trick or treating may look a little different. My area is a magnet for local trick and treaters so many people go above and beyond and it brings so much joy to everyone so here are some tips for Socially Distanced Trick and Treating for Halloween.

We LOVE making pom poms.  They are great for working on fine motor skills and for using up bits of yarn.  We are not so keen on spiders in real life, but what do you get when you cross pom poms, pipe cleaners and spiders?  A not so scary pom pom spider of course! 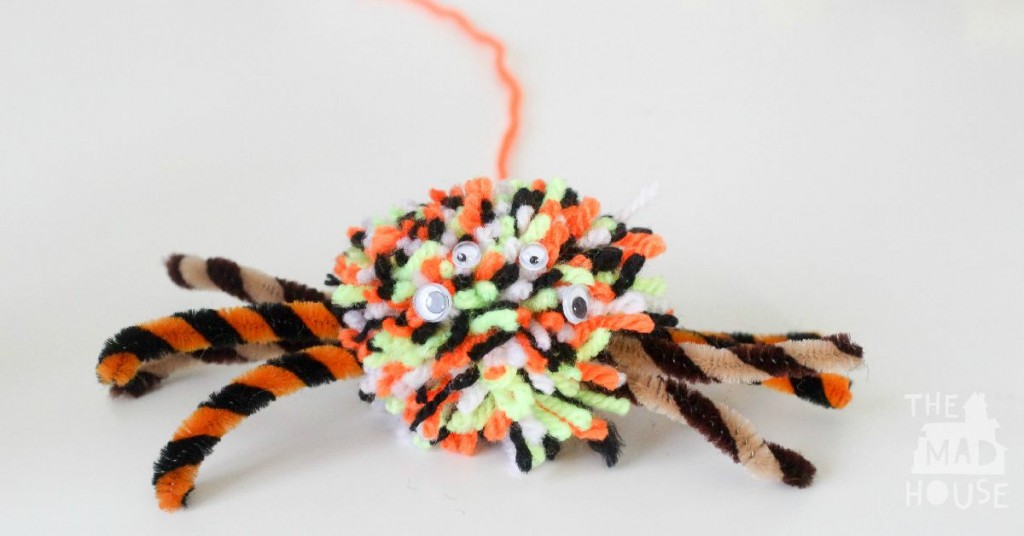 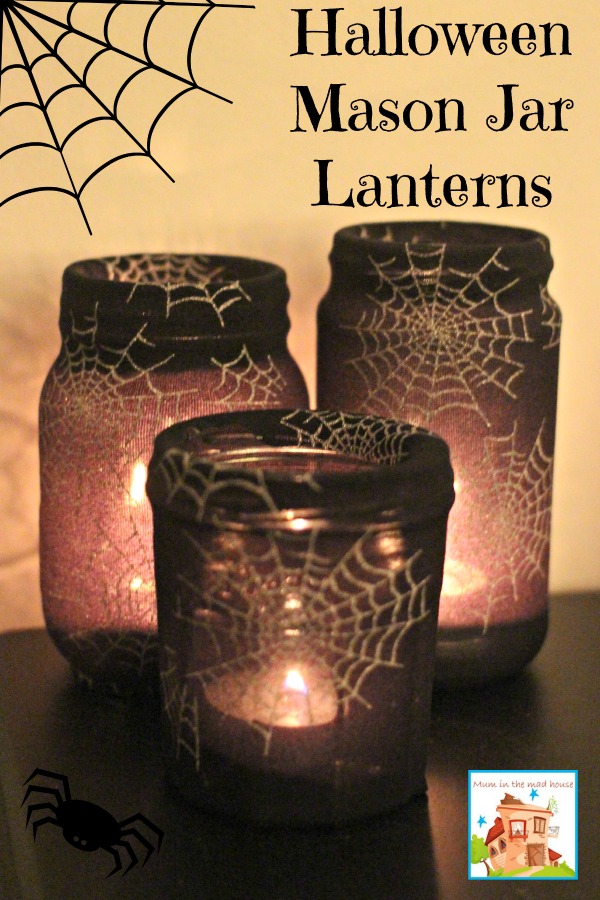 With the darker nights and the clocks due to go back, we love brightening up The Mad House and one way we do that is with Jam Jar/Mason Jar Lanterns or tealight holder. These Halloween lanterns are really easy to make Look great too, so I have teamed up with Betta Living to show you how you can reuse any old jars that you have. What you need to make Jam Jar or Mason Jar Halloween Lanterns

I know what we will be doing this Bonfire night.  We will be spending it with family as they put on their own annual fireworks show.  It is something we look forward to every year and it would be the perfect time to have a winter BBQ and the people at Country Valley Foods have some brilliant  meat hampers at the moment. There is nothing better than some lovely warm food whilst watching fireworks and it makes for a great evening for everyone.  I particularly like the Meat Hampers from Country Valley and think they are really great value.  Even better for me they are a local company and have sites not far from END_OF_DOCUMENT_TOKEN_TO_BE_REPLACED 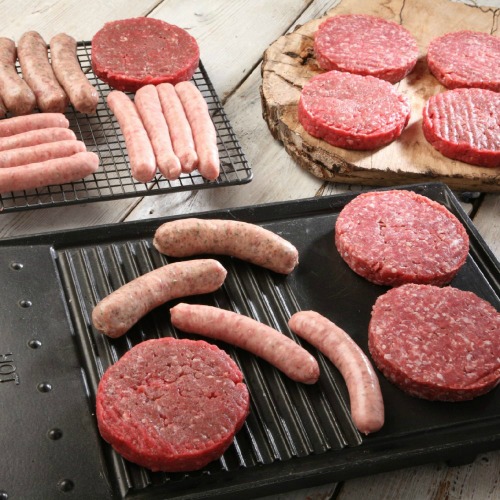 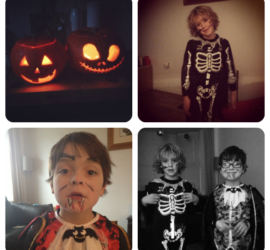 Today we were sent some Snazaroo face paints by the wonderful chaps and chapesses at Panasonic and Mini decided he wanted to have his face painted as Dracula. So me and Maxi sat him down and I did the best of a bad job. When I was finished Maxi asked if he could put a pumpkin on my face using a stencil we had been sent, so I said of course and then he asked for a couple of stencils on his face. I bit down hard on my lip and tried not to squeal a th shock and stenciled on a bat and a spider web as requested.

I then went in the kitchen to tidy up the mess and light the pumpkins and left the boys to play a board game. You can then imagine my shock when I walked in to find Maxi had been in the dressing up box and put on Mini’s skeleton costume from last year. Yes it was short, but he had put on his black thermal pants under, so you couldn’t tell.

I decided not to say anything and you should have seen MadDads face when he got home. He was delighted and for the first time ever he took both boys trick or treating. So good things come to those who wait, either that or the lure of all that Halloween candy got too much for him!

ini is also joining in with the Spooky Scribe team and below is his story, which the team at Asda are going to to add to a book for him to keep. So without further ado, I present you Mini’s story, which he typed up himself and added the clip art too (he is six and I am in awe of his computer skills)! I guess you can make out from this story, that Mini has a sweet tooth. 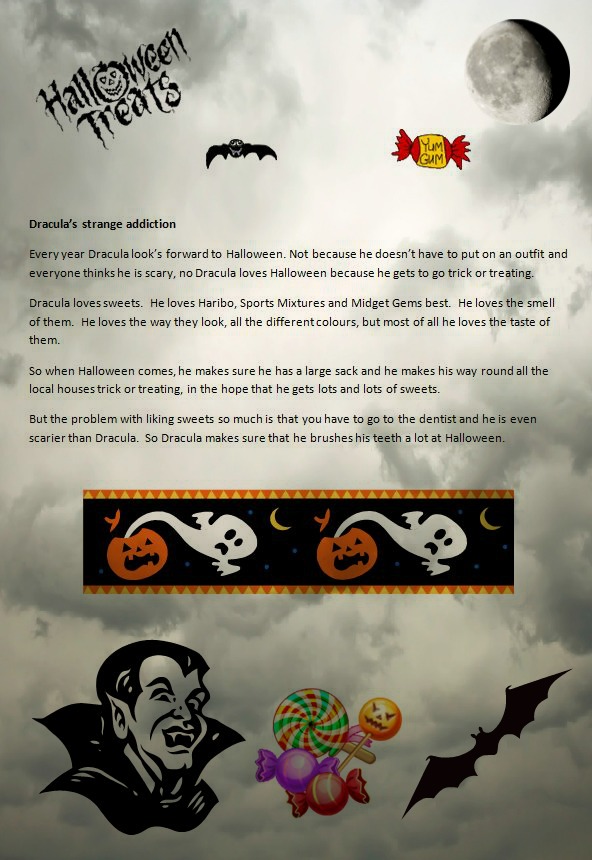