Secondly, children this age DO NOT NEED mobile phones. Both my boys play outside, however, initially we used walkie talkies to keep in contact. Now they can both tell the time they have a watch and come back at a specific time. It is their responsibility to do as I tell them too. If they go to play at anyone’s house or or activity such as cubs or football I make sure I have the contact numbers of a responsible adult. I am their parent, so I make sure I look after them the best I can. I do not put that responsibility on them at four or even at nine. I do not feel that at four my children would have known when to call 999 and feel that it is unreasonable to give them access to the emergency services.

This is without bringing in to the debate concerns about the long term health effects of mobile phones or the fact that a first phone introduces them to technology far too early and that there are studies out there that prove that screens have an impact on our ability to sleep.

Children are bombarded with technology from such a young age and I want my children to stay children for as long as possible. I want them to feel as though they can go play on their bike without worrying that they are carrying a phone with them that could make them a target for mugging. What if they lose it. This particular phone costs a minimum of £50, yes £50. It is a lot of money to make them responsible for. I also feel that it is just another way to make money out of children and their parents.

I survived as a child and a teenager without a mobile phone. I appreciate things change and I am not against phones for teenager, but I do not want to expose my children to them at this age.

If you are worried about losing your children in places such as LEGOLAND or on days out I was sent some fantastic temporary tattoos with our mobile phone number on for the boys. I have taught them to look out for a person in a uniform or a mum with children and to tell them that they have lost us and could they call us on the number on the boys tattoos. Much cheaper than the £50 for the phone and it also meant that we had the stranger danger conversation too.

All of the above is enough for me without bring the following shocking statistics in to things:

According to the Cyberbullying Research Center (CRC), 25 percent of kids have been harassed or bullied with mobile calls or texts.
Only about half of the students who are cyberbullied tell their parents, also according to the CRC.
15 percent of kids have received a sexting message from someone they know.
60 percent of kids have sent texts during classroom hours.
I do not want to normalise or introduce my children to mobile phones at an early age. Where do you draw the line. I do not want my children to start taking a mobile phone to school or even preschool as that is the age this phone is targeted at. In fact I feel that giving a nine year old child a phone like this would actually make him a target for bullying. When I showed it to Maxi, who had seen it on CBBC Newsround, he said that his friends would laugh at him. 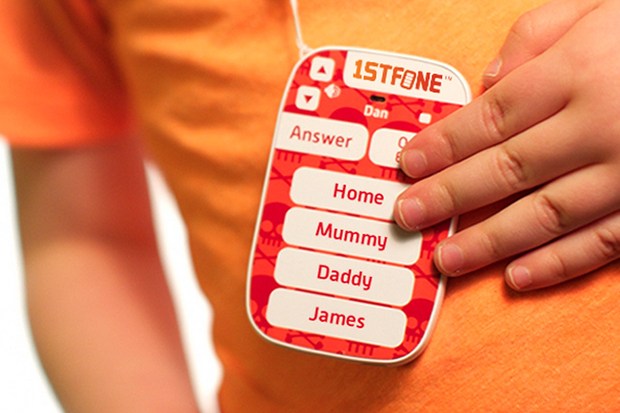