There is no way I could have used a traditional iron and have been so thankful of my Tefal Steam Generator as the iron part is much lighter as the water for the steam is not stored in it, rather it is stored in a separate part. The model I have is the Pro Express Total Auto Control – GV8930, which retails at around £299.

Now I appreciate that this is A LOT of money for what is an iron, but really it is more than that. Since getting mine I have halved my ironing time. I used to take around an hour on a Sunday to iron 5 mens shirts, the boys school shirts and tops and all the rest of the weeks ironing. Now that is down to 30 minutes. Plus is it easier and looks better too.

The Pro Express Total Auto Control means that I do not have to set the irons temperature, but I do have control of steam with its two preset steam levels. It has 5 bar of steam pressure which means that the results are pretty impressive.

Tefal’s unique anti-scale collector and Auto clean soleplate
Unlimited ironing time thanks to the permanent refill and 1.8L detachable water tank
Added safety with the auto-off feature
Environment friendly product with an “Eco” setting saving 20% of energy
The cord winds back in to the iron
The iron locks on to the base, even when hot 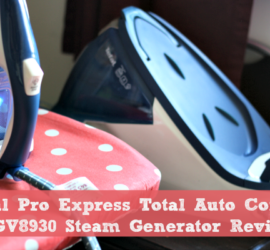