Maxi and Mini have both loved this play set and we have had hours of fun challenging each other with our own cup competitions. It is great as it packs up relatively small and is easy to play. Mini has had hours of fun just role playing with the characters and I have proven that I can beat both the boys at football! This is a great gift for any football made boy or girl and a really great value gift.

Wappy Dog is a game for the Nintendo DS and it has been a huge hit with Mini. Our Wappy Dog is called Ninja, which is a much better name, as I keep calling it yappy dog! So what is it. Well it is an interactive game with its own character dog. You feed it, pet, it, look after it, but you also play games with it. For a family without a dog it is great as it doesn’t cost anything once bought and it doesn’t need feeding with real food or taking for walks in the dark weather! Mini specifically loves playing rock, paper, scissors and fruit catch with his Wappy Dog.

Angry birds are taking over the world or so it seems. This is the perfect game for maxi, who has loved it. It is such a simple concept but captures his imagination and he just loves it as will many children of his age. Oh and Maddad has been know to play on it when he is in bed! It has Angry Birds, Angry Birds Seasons and Angry Birds Rio, it didn’t take long for Maxi and MadDad to be hooked on the straightforward yet satisfying game lay that defines Angry Birds. There are 19 episodes, each with an exclusive new level that will keep you interested and ready for more.

What is it about boys and torches? These have been a MASSIVE hit in The Mad House. They are ingenious and for two Star Wars and LEGO mad boys these are great presents. They have been left on a lot and we are still on our original set of batteries after 4 weeks, but you do have to buy your own as they do not come with them. Darth Vader’s light saber is removable and also lights up perfect for role play with evil Jedi teddies!

This year the boys have also asked for the following for Christmas: 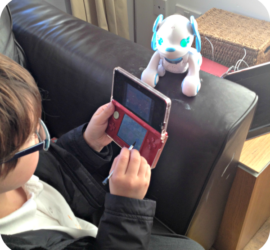