“How many sleeps now Mum?” asks an elated child in reference to how long it is until his birthday party. The mother takes a deep breath and slowly replies, “Only four more sleeps darling,” as she worryingly ponders how on earth she is going to get the party arranged in such a short amount of time. 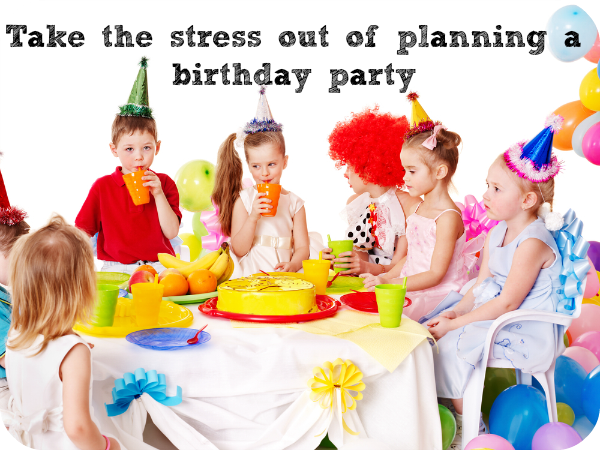 If you have an impending child’s birthday party and are feeling a little on the apprehensive side about organising it, take a look at following advice on how to take the stress out of arranging and hosting a kiddie’s party.

The key word in taking the stress out of a child’s birthday party and to make sure that it runs smoothly is ‘preparation’. Similar to when we prepare for any event or occasion, the earlier we start to organise it, the less stressful it will be in the long run.

While six months might be a little excessive, it will ultimately make your life easier if you start planning for the party a couple of months in advance. Begin by buying a couple of gifts each week, so that by the fifth week you’ll have all the presents taken care of. It is also a good idea to wrap the presents up as you buy them to avoid a last minute present wrapping. Also make sure that you write a reminder of what the gift is on the wrapper so that you’ll know what it is and who it will be appropriate for.

Buying presents in stages will also ensure that you spread the cost of the party out, which for families on a budget can be a more realistic way to afford hosting a child’s party.

Get the invitations out in advance

One of the principle reasons children squabble at parties is over party games, particularly if some kids don’t win a prize. Being sure of the exact numbers that will be attending the party will mean that you can plan the games and the prizes in accordance with the number of children attending.

It is therefore imperative that you get the invitations out early. Make sure that you write on the invites that you need to know whether the child will be attending ‘as soon as possible.’ Job your number or email address on the invite so that the parents can inform you of whether their son or daughter will be able to make it to the party.

Rushing around like a headless chicken on the morning of the party making sandwiches, baking the cake, preparing jelly and laying the table is not conducive with stress-free party planning. Getting the food together for the party can be made a lot calmer and simpler if you prepare it earlier. While some of the food needs to be fresh and won’t be able to be made until the day of the party, certain components of the birthday buffet can be prepared in advance. For example, you could make the cake the day before, lay the table on the eve of the party and get the jelly made and left in the fridge a couple of days before the party.

Two, three or even four hours can be a long time to entertain a dozen or so over-excited children. Instead of stressing about what you are going to do with them all afternoon, book a child’s entertainer. Getting a ‘magician’, ‘Captain Jack Sparrow’ or ‘Tinkerbell’ to make an appearance and entertain the kids for an hour at the wedding will give you some much needed breathing space.

When it comes to hosting great parties, Party Britain can certainly throw in a few ideas. With a vast range of fancy dress costumes for every occasion, this leading online supplier of eye-catching costumes will certainly help bring a child’s birthday party alive.