Both my boys have been going to the swimming pool since they were 4 weeks old.  Teaching the boys water confidence and eventually to swim was really important to me and today witnessed a first for me letting the boys going swimming on their own. 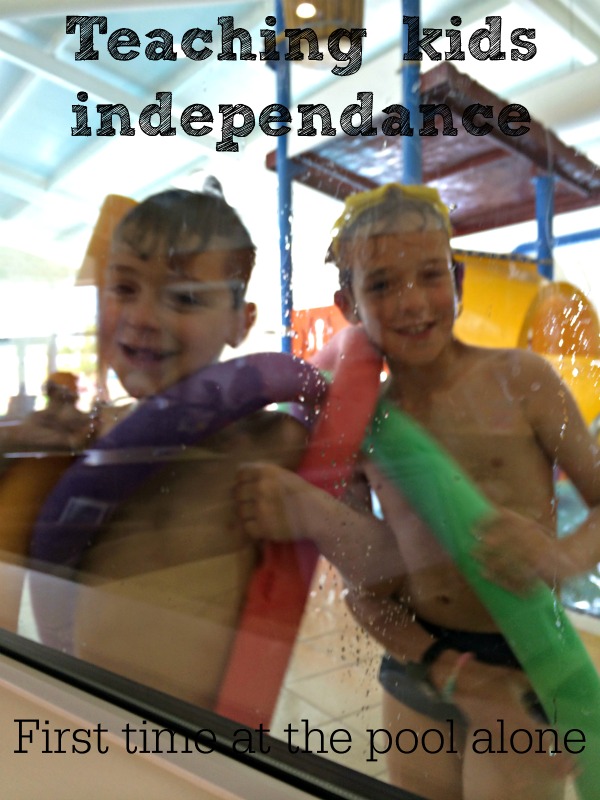 Now when I say on their own, what I really mean is that I sat and watched from the sidelines, well the cafe with Cass from Diary of a Frugal Family.  But the boys packed their own swimming kits, paid their entry, got themselves dressed and put their things into a locker.

I was not too concerned about them in the water as they are both pretty competent swimmers and have had lessons.

No it is the other aspects of letting them do this alone that had me quaking in my boots, leaving my boys to go this alone with the hope that they wouldn’t fight with each other and then once they had to get out, to be trusted to actually have a shower and not just stand under the water, but wash themselves and their hair.  Get in to clean clothes, remember the pound from the locker and put everything in their bag.

These boys of mine are only eight and nine and I did wonder if this was far too much to expect of them.  Was I being unrealistic in thinking that they were capable of doing this.  However, this is what they wanted to do, so I sat on my hands, squashed down my concerns, had faith in them and waited.

Thankfully Cass was with me and knew how I was feeling as Master Frugal is the same age as the boys and she encouraged me to believe that letting them have this independence was a good things to do and what more it was in a safe and supervised environment.

You know what she was right.  They managed, they even brought home everything that they took with them! What more Maxi even brushed his hair and Mini told me that he put his specs inside his shoe like I had taught him.

We all came away feeling really proud today.  We all achieved something.  I am giving these boys roots, so that they can grow wings.  We are one more step to rising the men I want them to be.