It isn’t uncommon these days for people to move in and out of houses and to buy, sell, relocate and leave home.  So it is pretty unusual that we have a family home.  My family home is filled with lots of wonderful memories.  Of flock wallpaper and tank tops.  I remember making milkshakes with condensed milk one Christmas on a mini mixer I received, sat on the floor in the kitchen with my Auntie Christine.  I remember the sliding glass doors of the 1960 laminate kitchen and the chest freezer, which was often filled with half a cow. 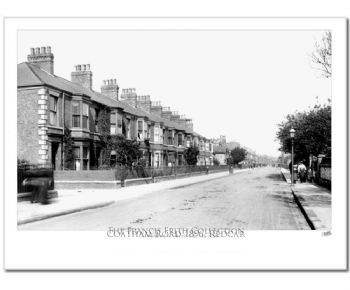 I remember fixing car’s with my dad in the back yard and jumping over the car lifts on my bike in the back alley with all the other children.  I remember the smell of baking bread and my mums amazing pies.  The noise of birthday parties and pass the parcel. I remember the joys of Christmas’ past, of rooms filled with family and the year that my dad answered the door to the front room with a Petit Typewriter in his hands!  I left for my wedding to MadDad on the arm of my father from the family home and each of my parents have pulled up outside to set off on their final journeys.  I love my family home and I also love the  wonderful story behind how it became out family home.

When my Dad was a young lad he was an apprentice at British Shipbuilders and was sent on secondment to Shell, at their Milford Haven site in Wales.  Back then my Grandad and Grandma lived in a council house and my dad would travel on his motorbike to Wales every Monday Morning and come back one weekend a month, but he always sent his wages home to his Mum for her to put in his account.

One month he returned home, only to find out that he didn’t live there anymore!  Yes it seems that my Grandad and Grandma had moved whilst he was away and he hadn’t received their letter in time.  So the people who had moved in to the council house gave him the address of the new house that his parents were living in.

He turned up at the new house (132) and found out that his parents had bought it, using the money he had sent home as a deposit!  Was he angry?  Yes initially, but it turned out that my Grandma who was a nurse was terminally ill and she had wanted her own house, so my Grandad had moved heaven and earth to get her what she wanted.  She died a year later.

When my Mum and Dad got Married in January 1970 she moved in with my Dad and Grandad and spent the best years of her life in the family home.

So that is how we have a family house, which is now my brothers, although my niece is going to be living there.

It makes me very happy to remember growing up in our home and seeing it kept in the family.

12 thoughts on “The Family Home”