Me, a really hard one for me to show this week and also they don’t define me totally, they have shaped me and who I am for the last 2 years, so I proudly present: 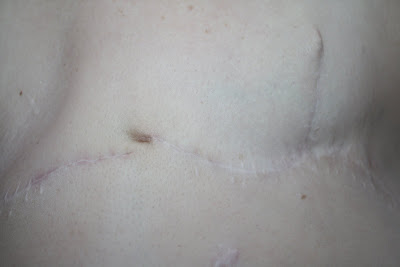 My scars, or at least some of them! 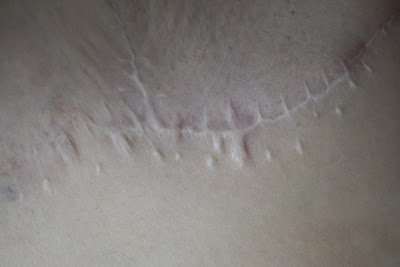 When MadDad first saw them, they were red, weeping and looked as though some one had butchered me, they were not symmetrical, neat or tidy in any way, mainly due to the sepsis and subsequent operation I needed.
But now they are mellowing, they are white, silver and raised, they run from under each armpit and meet in the middle with a vertical scar running up towards my collar bones.
They brought out different emotions in each of us.  He hated them, they made his angry, frustrated and upset.  To him they represented the surgeon and body’s failure to deal with the reconstruction.
To me they brought relief mainly.  I was relieved that my breasts were gone and couldn’t harm me, but they also made me feel less of a woman, less attractive, especially as I was used to having 36GG ones.
Now with the help of counselling we have both reconciled our feelings and they are just me.
This was inspired by Tara over at Sticky Fingers for The Gallery