Skip to content
Home » cat. Smudge » The indignity of being Mr Smudge

This wonderful post from Bad Penny at The Hen House made me think about our cat.  He was one of a pair that we got many moons ago (14 years in fact) after I miscarried twins at 20 weeks.  They were our first baby’s and we love them dearly.  We only have one left in our life now a wonderful OAP who goes by the title of Mr Smudge.  It used to be just smudge, but so many people kept calling him a she that we didn’t want he to get a complex so the Mr was introduced.
Now you wont find me saying this often, as I always though Mr Smudge aka TheCookingFat had a fine life here in TheMadHouse, well the truth be told he did, until the MiniMads came along. 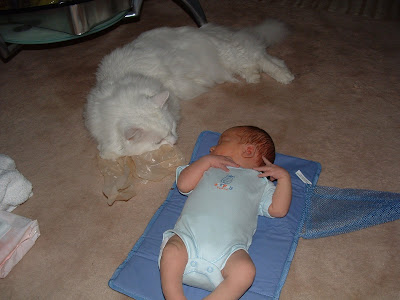 BC (Before Children) he and his brother (Snowy) lived the life of Riley.  They had the best food, were groomed every evening, where bought special milk, had suncream applied on their ears if they were going out in the sun and often shared a five star cattery when we went on holiday, in fact it was more of a hotel for cats, heated beds, a litter tray each and an open air walk in the courtyard each evening.  They also were often given cat nip or “smacked up” as it was called in our house. Since the children were born it has been another matter really, we introduced MaxiMad to the cat by leaving him in his car seat and letting them both have a sniff and the three of them cohabited very well until Maxi began to crawl and walk and then he would tend to coner them and try to pick them up.  Both the cats behaved exemplary and never scratched, which was more than could be said of our first born. 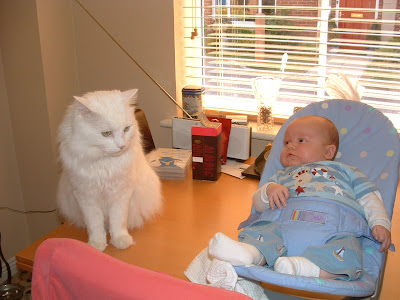 Sadly we had to have Snowy put down just before MiniMad was born, so Mr Smudge was left to fend for himself, through many indignities, which have included being painted, picked up, dressed up, put in a dolls buggy and pushed around, tucked up in bed, but I think the final straw for Mr Smudge. 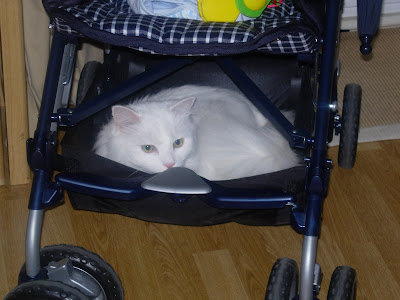 It was very cold in these parts yesterday and I had the tumble dryer on.  Me and MiniMad had emptied it and folded the dry washing.  I was just about to get the bedtime milk ready for the MiniMads, when I herd the following “come here Mr Smudge, I have a nice warm bed for you”.  It turns out that MiniMad had tucked Mr Smudge up in the tumble dryer.  Good job I had turned it off at the wall!

3 thoughts on “The indignity of being Mr Smudge”