I love yellow Sports Mix, in fact the pineapple ones are the only reason I ever buy a pack of Sport Mixture.  I take out all the yellow ones and then share the rest between the family, but they never, ever get a yellow one. 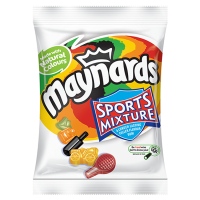 Over the last couple of months neither have I.  All the yellow Sports Mixture have disappeared.  It was very frustrating, but I just stopped buying them.  My mum bought me a box of Sports Mixture for my birthday in the hope that the box might have some of the illusive yellow ones in.  Well I opened the box after her death and guess what, not one yellow sweet was to be found.

So one night in my sleep deprived state I emailed Cadbury about the lack of pineapple sweets in Sports Mixture and then put it out of my mind.

Imagine my delight when I opened a letter this morning from Cadbury explaining that they gave had some minor flavour issues with the pineapple flavour and it has not been included in recent pack or boxes of Sports Mixture, however, they have now resolved this issue and I should see the reintroduction of my beloved pineapple in the coming weeks.  Along with a letter they included a voucher for £3.50 so I could buy some more.

So hats off to Cadbury for taking the time and effort to listen to my sleep deprived e-mail and then respond so promptly even over the festive season.