Skip to content
Home » mini mads » The things they say and do, The Beavers Edition

Maxi has been a Beaver for nearly a year and last week Monday was the eagerly anticipated first night of Mini’s induction in to the world of Beavers. He was ready a whole hour before it was time to go, in Maxi’s old uniform (which was kindly donated by a kind sole off twitter). 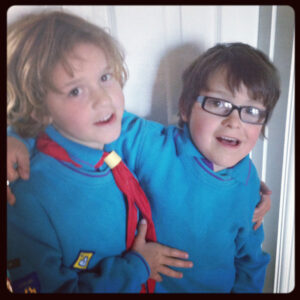 This week he was just as eager to get there and ran out of the house early. When he came home all red faced (they played dodge ball) we discussed what he had learned:

“We learned about Saint George Mummy.  He is the patron saint of England” he happily told us

“He was a Roman soldier who be came a crispy one”

Well we couldnt stop laughing and then Maxi told him

“No Mini, he became a Christian, but it doesn’t matter as it is a myth anyway”

4 thoughts on “The things they say and do, The Beavers Edition”