We have recently been on a weeks holiday to La Croix Du Vieux Pont with  Al Fresco.  It is the first time we have experienced this type of holiday and decided to also take along my eight year old niece too. 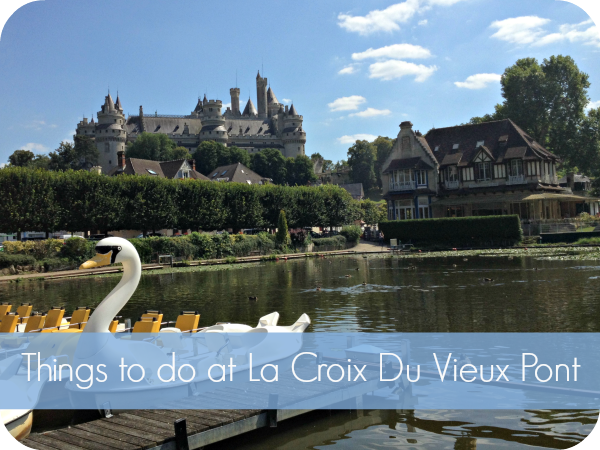 Sometimes it can be hard to find a holiday that encompasses something for all ages and the likes of all the people on holiday and this is something that we have struggled with in the past.  Maxi and Mini are active from the minute they get up to the minute they fall asleep.  They love sports and swimming and doing stuff.  MadDad loves exploring, sightseeing and hates sitting in the sun.  He finds relaxing hard.  Me, well I like to catch up on my reading on holiday and to take time out from mothering duties!

It turns out that a mobile home holiday in France has something to suit all of us and we had an ace time and all relaxed and had fun.  We found that getting up and about early in the day and exploring the local area and chateaus suited us well before returning to the sight in the late afternoon and spending that time at the pool until it closed at around 7pm. 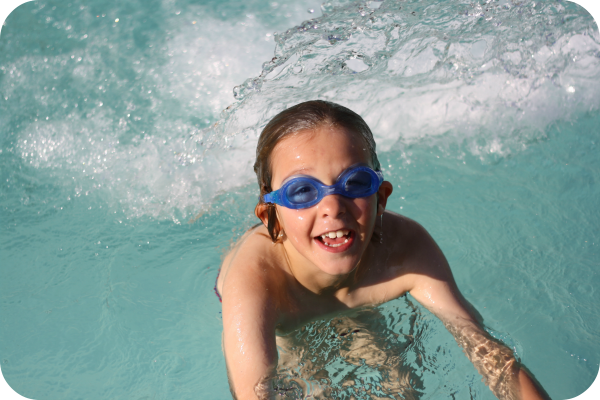 The pool at La Croix Du Vieux Pont is fantastic and consists of one outdoor pool and three indoor pool areas with two slides.  The indoor pools have roofs that open.  We used the pool everyday and managed to find a sun lounger without too much trouble to place our things.  In fact the children would have remained in the pool all day every day if they were allowed.  The lifeguards were well placed and kept things under control ensuring that everyone had a good time.  The changing rooms are dark and dank, however, we never used them preferring to go with our costumes on.  I even managed to read a book whilst watching. 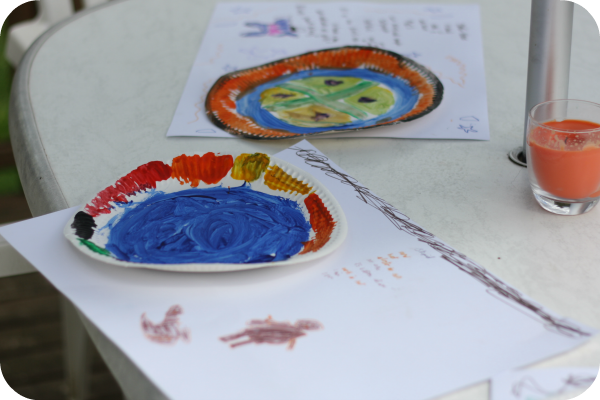 The kids club operated a two hour session from 10am to midday and from 4pm to 6pm daily.  The children went t0 one on the monday of our trip and loved it.  They designed their own planets and painted them and they also played some games.  They also made the decision that they HAD to go to the club on the Friday for Football Friday, which was great as meant that I could pack the caravan up.  We were so impressed that the staff rememeber the childrens names and if they bumped in to us on the park used their names.  The children would have gone every day if we had let them!

There are four table tennis tables in a cabin on the lakeside and another two in the sports area.  We bought bats and balls from the site shop and the children played with them a lot.  Next time I would make sure we took our own with us.

There are at least three play parks on the site and the children played in each and everyone of them.  They really enjoyed them and we loved that we could set a time with them and let them have some freedom to go and play together. 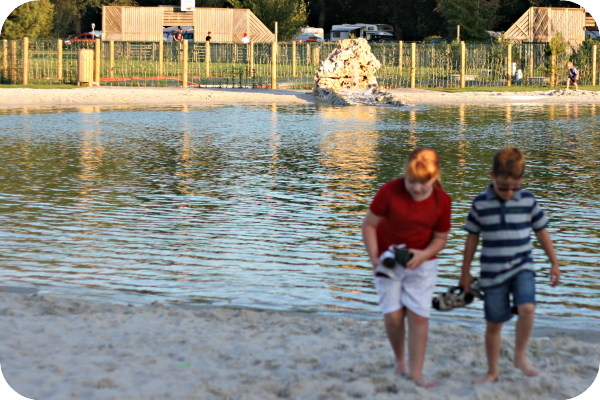 Mini and my Niece particularly loved playing on the beach, but we didn’t use the lake to swim in.  It was very popular and plenty of people were in with blow up dinghies etc.  It was shallow and perfect for toddlers.

The park is well catered for if your children want to go on trampolines and Go Karts.  They do cost and the go karts were E2 for 5 minutes.  We let the children have one go on them, but there was plenty of other activities that were free.  There is also a new bowling Alley and Laser Tag if it is raining.

La Croix Du Vieux Pont is perfectly placed for visits to Disneyland Paris and also to Parc Asterix.  You can go on pre arranged excursions, but we decided to stay more local. 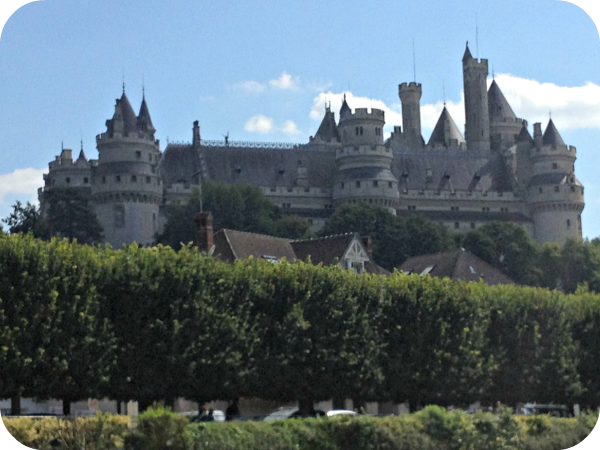 We spent a wonderful morning exploring Chateau du Pierrefonds, which is where the BBC series Merlin was filmed.  It is a picture perfect fairytale chateau.  Children get in free and it cost E7.50 per adult.  It opened at 9.30 am and although they recommend you only need an hour to look round we were there until 1pm.   Pierrefonds is a very picturesque town and we decided to make a day of it and had lunch out oo.  You can use pedalos on the lake.  All of us really enjoyed Pierrefonds and it was only a 20 minute drive from the campsite.  It turns out that they had a medieval weekend just before we arrived, so do check out the website for details of events.

We spent a morning running around the impressive ruins of Coucy castle, which was a stronghold in the middle ages built in the early 13th century on a rocky spur to the north of Soissons.  We arrived as the castle opened at 10am and pretty much had the ruins all to ourselves.   This was the childrens favorite  castle of the holiday, partly down to being able to run and explore.   They were up and down the remaining towers at the speed of lightening and Chateau de Coucy is certainly a perfect place to enjoy a picnic lunch.  It is free for children and cost E5.5 each for me and MadDad to get in.  Parking is free and it was around 35 minutes away from the camp site.  It really is an impressive sight as you drive up to Coucy to see the Chateau sitting high on the hill.

My boys are now hooked on French food.  Well certain French foods including chocolate crepes, speculoos spread and biscuits and Lu Lu cake bears filled with chocolate.  They had lots of fun checking out French foods trying to translate them to english and trying them anyway.  They used their pocket money to bring home crepes, biscuits, toffees, pomme frite sauce, syrups and salad dressing.  They would have brought back a ton of ice cream if we had a freezer in the car. 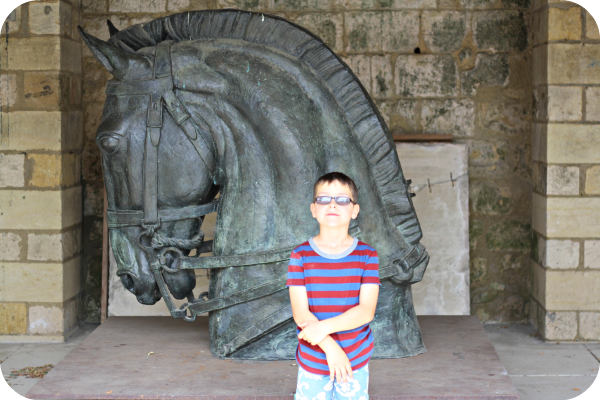 The castle at Vez is under private ownership and is open from 1pm to 7pm during high season and is E6 per adult and free to under 12’S..  Do not expect this to be a traditional castle visit.  The grounds and castle house some fantastic modern art.   We spend a couple of hours here exploring the art installations in the wooded grounds and sheltering from the heat in the thick walled chapel.  Vez is only 15 minutes from the camp site.  This is where I fell trying to jump off a wall! 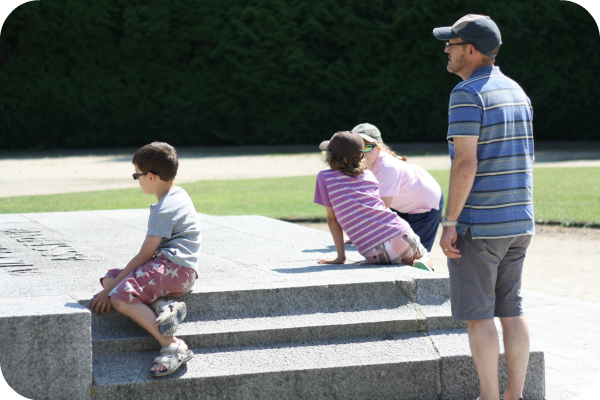 We stumbled upon the clearing and the museum by chance when we were exploring the area and we were so glad we did.  You can visit the clearing and the monuments free of charge of pay  around E5 per adult to go in ot the museum and see the carriage in which the armistice was signed.   The museum would not be suitable for little children and there are over 700 pictures on slides showing the devastation of the war which might not be suitable for some children to see (we didn’t let the boys look at all of them).  Both of my boys are interested in history as is MadDad and they loved discussing it with him.

Details: 7 nights accommodation in a Vivaldi Mobile Home at La Croix Du Vieux Pont, which sleeps 6 and Eurotunnel Crossing for one car costs £1214 for 2 adults and 3 children on August 17 2013.  Special offers and discounts are available at certain times of year, see the Al Fresco website for details.  We received free Eurotunnel crossing and accommodation for the purposes of this review.  You can see more photos of our trip over on Facebook.