As a family we love York.  It is only an hours drive for us and somewhere that we enjoy visiting and browsing.  This past weekend was St Nicholas Fayre in York, which is billed as one of the most popular Christmas markets in the UK, with thousands of visitors coming to York over the four-day event.

We hadn’t been to York for a while, so thought that we would try and do some Christmas shopping at the Fayre and gave both the boys their pocket money and we set off with a challenge to try and buy presents for my mother in law and farther in law. 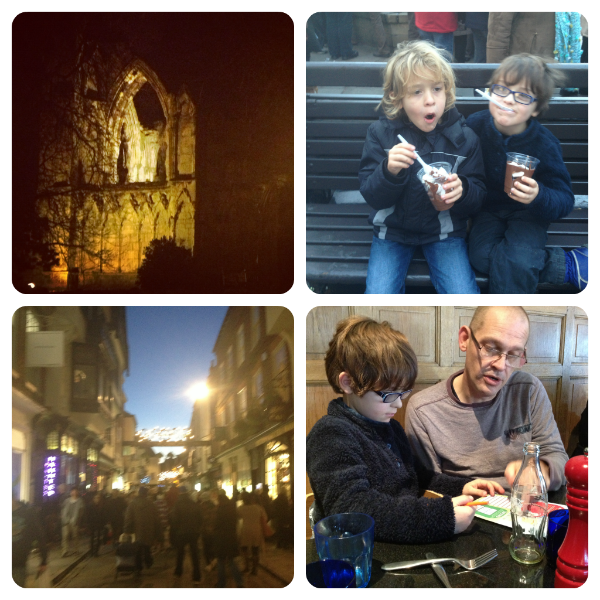 We decided to park at Mary Gate, which is a long stay car park, but we could have chosen one of the many park and rides, but know from experience that the one on our side of York sometimes gets very busy and can mean queuing for a bus and with two impatient boys we would rather park.  It cost £11 for a full days parking.  The joy of parking at Mary Gate is that we get to stroll through the Museum Gardens and feed the squirrels and look a the abbey ruins and the observatory.  It also is a wonderful green space nad gives the boys a chance to run around after an hours car journey.

We should have realised that York would be busy from the fact the car park was full, but my of my I do not think I have ever seen it this full before.  The outdoor market stalls, which are housed in huts were heaving.  Both the boys got basked badly by peoples rucksacks and it was very difficult to get in to any of the stalls to see what was being sold.  In the end we had to put the boys on our shoulders and at six and seven that was hard work.

We managed to get to a couple of the stalls that we really wanted to and bought a fab selection of local cheese and also locally produced oils and vinaigrette, in addition to an oil pouring bottle made my a local potter.  The boys wanted to get this years christmas ornament from the market, but we couldn’t get a look in at any of the decoration stalls, so we sat them down and bought them a hot chocolate pot instead!  I would say that the decoration stalls that we got to see where not that impressive.  We ideally were looking for artisan items, but there were all pretty mass produced stuff.

We didn’t waste our day in York.  We made sure that we had a stroll round all of the local shops in the streets, had lunch at Pizza Express and a pot of tea in a cafe.  We would have liked to visit Betty’s but the normally long queue was massive, so we gave it a miss this time.

York is a wonderfully compact city with plenty to see and do and we also visited the Yorvic Viking Center (review to follow)  and had a walk round York Minster.  If you have more time you can always visit the National Railway Museum which is free or one of the other many museums