Maxi hates hats.  He is one of those children that has sensitivity issues.  There was a time when it used to take an hour to put on a pair of socks  but thankfully those days are over, however  we are left with the fact that hats itch and make his head uncomfortable.

Believe me when I say I have drawers full of hats, I have tried every possible combination for him and at nearly eight I was losing hope.  He would ware one for 3 minutes and then off his head it would come.

So when we were offered a set of Zaini hats, I didn’t hold out much hope.  In fact I measured my head to make sure the one he picked could double up as one for me! 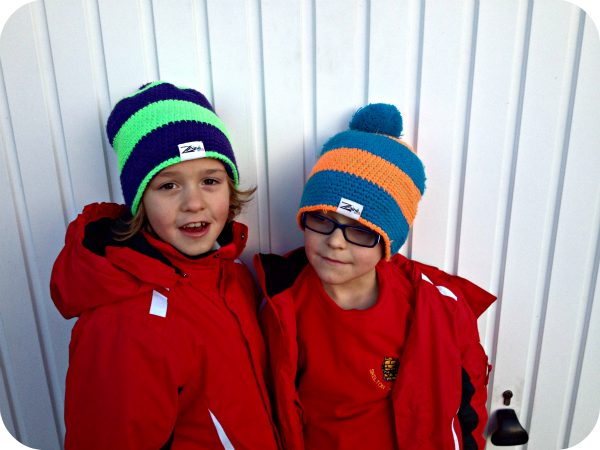 The boys chose their hats from the Zaini Kids range.

All Zaini Kids hats are fully fleeced lined for the utmost comfort and quality and are made from 100% acrylic which is extremely durable towards rain, snow and wind. It is not waterproof , but it will resist rain without altering the hat. They can be hand washed only at 40 degrees.

The idea of Zaini started in 2010 in a ski resort in Northern France, when Scottish ski instructor Miranda Harper started hand knitting hats for friends because she couldn’t find the kind she liked. Since then Zaini, and  Zaini Kids, has become an established brand which sells and distributes hand made products throughout the world.

So back to the hat, how did it fair.  Well he has been wearing it for a week, as it is fleece lines it doesn’t itch per say and he is doing much better than he has with any other hat.  He loves the pom pom on the top and it has withstood both hail and rain.  At £14.99 it is much more than I have ever paid for a hat for him, but as a cost per wear it is the best value hat I have ever had for him too!  So it has got a big thumbs up from all of us.

One thought on “Keeping hypersensitive heads warm with Zaini hats”