When Maxi was 4 months old he became unwell.  He got a cold and was very unhappy, not his normal self at all.  He also fell off my knee and we were so concerned we took him to A&E at 6pm.  The doctor took a look at him and said he was fine and just to keep an eye on him and bring him back in if he was being sick. 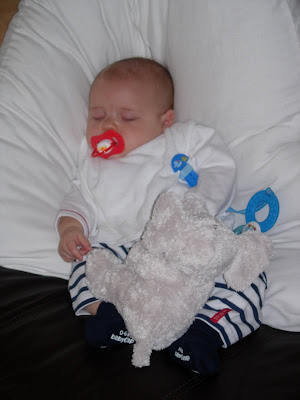 Maxi on the afternoon before he fell off the sofa
We put our little baby to bed at 8pm that night and tried to give him a feed at 11pm, as usual, but he wouldn’t take the milk, in fact he didn’t cry, he was just struggling for breath.  We decided to ring the out of hours GP service and the doctor was with us within 30 minutes.  Within 2 minutes of entering the house, he told us to out our baby in the car and to drive straight to A&E.
He took our house keys and said he would lock up and meet us there, that there wasn’t time to call an ambulance and we could get him there quicker.
A doctor and two nurses met us at the door to A&E and rushed our baby in to a cubical and then all hell broke out.  Maxi was ventilated and a cannula put in.  He has wires coming from his foot and finger and was put on a heart monitor too.  I have never been so scared since the crash section 4 months previous when we thought we were losing him. 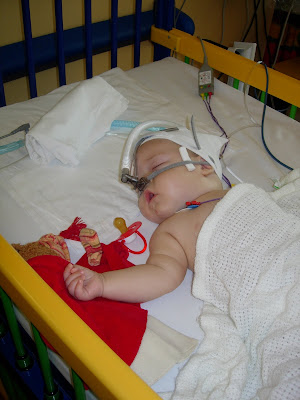 Maxi on CPAP in the HDU at Royal Berks
Our baby was moved to the high dependency unit as the Royal Berkshire doesn’t have an ITU and we started what was our long long Vidual.  Maxi was suffering with breathing difficulties and they couldn’t figure out why, he didn’t have an infection, it was the middles of the summer not the bronchiolitis season, they were flummoxed.  Instead of getting better, our little baby got worse and was transferred to ITU at Great Ormond Street, it was suggested that we get him christened.
We didn’t, he started to improve, we returned back to The Royal Berkshire High Dependency unit and began the long recovery, he was tube fed, changed on to nasal cpap and gradually got better.
A month later we did it all again, bar the Great Ormand Street part, as we managed to deal with it at the Royal Berkshire.  1 day after he was released we dashed down the M1 and had a joint christening for Maxi and my Niece (we basically hijacked their prearranged day), thanks to my wonderful sister in law, who arranged and planned everything. 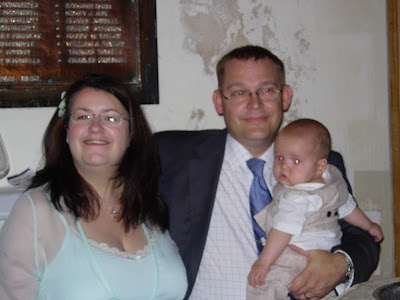 Maxi’s Christening
This became our life for until Maxi turned 3, we couldn’t go a couple of month over winter without an admission.  We had over 10 sweat tests for cystic fibrosis, each time the results were in the grey area or there wasn’t enough sweat to test.  Finally we for a negative test, we were overjoyed.  We were very lucky that we had a super Consultant, who agree that we needed to take some steps to prevent this happening.
So Maxi underwent numerous blood tests  and other tests and it was discovered that his specific antibodies were virtually non existent.  So Maxi underwent six months of re immunization and also had additional immunizations and guess what.  It made a huge difference.  He no longer picked up every virus going.
We have actually gone an entire winter without any hospitalisations.  It is wonderful.  We are able to manage his condition at home, which is wonderful.  He has done a whole year in Reception Class without one absence.